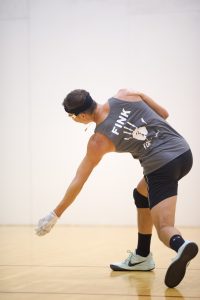 Tucson, AZ, WPH Press, 9/21/18- Do you want to learn how to play handball like the best players in the world? Now you can! The Race 4 Eight Elite Men’s and Women’s stars broke down handball’s most important shots and rules, so not only can you watch the pros on ESPN3, but you can play like them too!

Race 4 Eight #1 Killian Carroll, Ace Serve leader on tour, breaks down the Power Serve and Lob Serve. Flat roll out king Mando Ortiz, teaches the art of the Kill Shot; meanwhile, women’s Race 4 Eight #1 and winner of 15 of the 17 WR48 events since the inception of the tour in 2013, Catriona Casey, shows us the back wall kill.