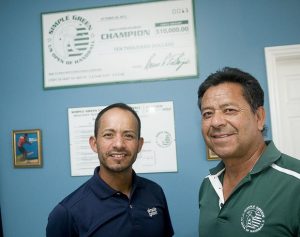 Naty Alvardo Sr. is synonymous with greatness in handball, as “El Gato” dominated the sport for more than a decade with grace, power, humility, and class. Alvarado Sr. ushered in a new era of pro handball, taking two-handed offense, power, and aggressiveness to the forefront of the sport and reshaping the game for generations to come. El Gato won 63 USHA Spalding/Gatorade Pro Stops, retired with a then record 11 USHA 4-Wall pro singles titles, teamed with Vern Roberts to dominate 3-Wall and 4-Wall national doubles and won hundreds of weekend tournaments.

Alvarado retired from professional handball at the age of 36 and quickly transitioned into one of the sport’s greatest ambassadors and promoters. Alvarado teamed with good friend Mr. Bruce FaBrizio and Simple Green to host the Simple Green U.S. Open of Handball in Southern California, combining 4-Wall, 3-Wall, and 1-Wall handball to create handball’s Super Bowl every October for more than a decade.

More important than all of his titles and his passion for growing the game was always El Gato’s family, who all live within walking distance of him today in Hesperia, CA.

Naty Alvarado, Sr. has long been one of handball’s most likable and respected champions and handball’s greatest champion was kind enough to sit down with the WPH in a wide-ranging four part interview discussing his start in the game, his greatest rivals, his breakthrough moment, his move from Mexico to California, his coaches and mentors, his early learning experiences, his inspirations, his biggest career wins, his training routine, his handball heroes, stepping away from the pro tour, growing the game, watching his son Naty Jr. rise to the top of the sport, the Simple Green U.S. Open and much more in this blockbuster conversation.

Here’s a sample from the five-part interview series featured on Patreon.com/wphlive:

Which pro players do you enjoy watching on the Race 4 Eight tour today?

Unfortunately, since we stopped hosting the U. S. Open of Handball sponsored by Simple Green and Mr. Bruce FaBrizio, I have not been able to watch much. I certainly loved to watch Naty Jr., John Bike, Fred Lewis, Vince Munoz and Tati Silveyra – they had the style of play similar to mine, so I enjoyed them a lot in some different ways. I liked watching Bo Blinski, Poncho Monreal, Jon Sabo and Danny Bell. In the last 4 years, I’ve enjoyed Killian Carroll, Paul Brady, Mando Ortiz, Sean Lenning and the Cordova brothers.

How can handball players continue to improve into their 40’s and 50’s?

Those who avoided injuries in their early years and those with limited abilities who are sticking around can improve the most studying the game. Those who stayed in shape and trained to become better are the ones who can benefit the most.

Go to Patreon.com/wphlive and make a pledge.  Become a WPH Patreon and receive two exclusive handball-related posts each day during the pandemic.  From interviews, lost video files, instructionals, tutorials and more!