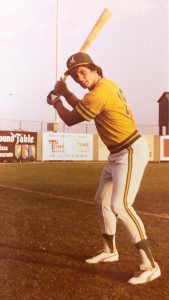 “I’m playing on my home court in front of all my family, friends, and crowd. I’m feeling good. I won the first three rounds and now I’m one step from qualifying for the first time after a number of near misses. I’m playing Portland’s Dave Steinberg. He’s an animal. I beat him last year in an 11-9 tiebreaker and he’s thinking payback. I started strong, winning the first game 21-12. Steinberg gets on top of me in the second game and doesn’t let me breathe. He forces a tiebreaker. The tiebreaker is much like the second game. He’s dominating, up 9-4. I called a timeout and went outside and told myself to get my head on straight. The TAC crowd was urging me, cheering me on. I start chipping away. 5-9, 6-9, eventually 9-9…..”  – Rick Hatcher

Despite never hitting a handball until the age of 22, Rick Hatcher rose to #13 on the USHA Spalding/Gatorade Pro Tour in the late 1980’s, defeating many of the era’s top players.

“Hatch” was born and raised in Ft. Walton Beach, FL, excelling in just about every sport he played. Hatch’s baseball talent took him from the University of South Alabama and Junior College ball in Arizona to the Minor Leagues with the Oakland A’s.  After his stint in the minor’s, he played in a semi pro league in Tucson for the Tucson Athletic Club.  Thus, his connection to the TAC and handball.  At the TAC he witnessed his first glimpse of the perfect game.

In this two-part exclusive Becoming the Hatch, Rick discusses his early fascination with handball, working his way through Tucson’s handball gauntlet, his practice match wars, sparring with Fred Lewis and Vern Roberts, qualifying for the pro tour, his intense training routine, today’s game compared to his era, his favorite tournaments and much more.

Read the multiple-part Exclusive Interview on Patreon.com/wphlive.  Why Patreon?