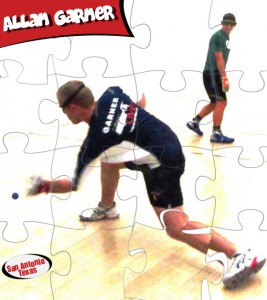 How long have you been playing: 15 years

Goals in handball going forward: Attend as many tournaments as possible and see if I can get back to #1

What are your goals for the R48 season: Win the Player’s Championship in Salt Lake City and get back inside the top 4

How do you prepare for Race events: Cardio, light weights, handball 2-3 times per week

What do you love about handball: Handball is the ultimate sport that requires a little bit of everything

How would you describe your game:  2-handed shooter with back wall and defensive skills

What is your best shot: Back wall

Given the choice, what top R48 would you most like to play: Aaron Garner

Who has inspired you to play this game at such a high level: The development of a great and organized pro tour. Love the WPH!!!

Who do you think is the best player of all time: Jimmy Jacobs, Dave Chapman, Naty Sr, Paul Brady

Which pro would you have most liked to play in his prime: Jimmy Jacobs

Garner is often compared to Sean Lenning as both dominated young and both are the same age, with Garner four days younger. The Blond Bombshell announced his arrival in elite handball circles at the age of 19 when he fell one point shy of making the finals of the four wall nationals. He followed up that run with a victory over Ireland’s Eoin Kennedy at the 2005 Casey Lawlor Cup and was the MVP of the American Team that year. In 2009, after toggling up and down the rankings, Garner lost in a close finals breaker to the game’s top player, Paul Brady, at the World Handball Championships in Portland, Oregon. A few tour stop wins after 2009 gave Garner enough confidence to defeat David Chapman in the finals of the 2010 US Open of Handball. Garner is a threat at any tournament he enters and will be on the hunt to win at the next Race stop.