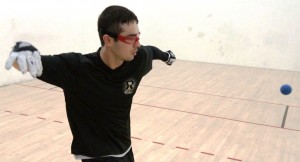 From: Hermosillo, Mexico
Born: January 24, 1988
Height: 5’11”
Weight: 165 lbs
Dominant hand: Left
Where you live now: Tucson, AZ
Coach: My intuition and Fred Lewis
Sparring partner(s) at home: Daniel Perez, Dave Vincent, Sean Lenning, David Fink, myself
Most important win in a tournament and most satisfying win in a tournament: Defeating Sean Lenning to win the Player’s Championship in the R48 I in Seattle ‘12
Best tournament ever won: Simple Green U.S. Open ‘13
How long have you been playing: 14 years in the business
What do you do for work: Entrepreneur, athlete
What are your goals in handball going forward: To become the best player I can be
What are your goals for the R48 season: To win every battle, plus the war
Favorite handball tournament: Plummer Bash, U.S. Open, Denver, Alaska
How do you prepare for Race events: By eating well and stretching a lot
What do you love about handball: Everything!
Favorite pro player: Lenning, Allan Garner, Tati, Brady, Bike, Alvarado
How would you describe your game: Aggressive
What is your best shot: Serve and back wall
Given the choice, what top R48 would you most like to play: Allan Garner
Who has inspired you to play this game at such a high level: Alvarado’s, Fred Lewis, Sean Lenning, David Vincent
Who do you think is the best player of all time: Paul Brady
Which pro would you have most liked to have played in his prime: Paul Brady

Luis Moreno has won an astounding nine Race titles in 18 starts, tripling his nearest competitor (Lenning). Moreno has the ability to make the game look so easy, thus being coined “The Natural” by his peers. Moreno is the only player to have defeated Paul Brady in singles since 2005 and nearly notched his second win over “The Gunner” at the R48 II Player’s Championship, losing in a thrilling tiebreaker. Moreno possesses the rare ability to become stronger during events, always playing his best handball in the finals. Moreno owns a 9-1 record in Race finals with his only loss in the finals coming to Charly Shanks in Salt Lake City during the R48 II. One of the game’s most likeable and charismatic stars, Moreno appears poised to dominate the sport for the next decade.