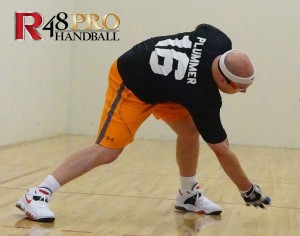 From: Long Beach, CA
Born: June 26, 1975
Height: 5’10”
Weight: 218 lbs
Sparring partner(s) at home: Kevin Pettus and Wil Lemp
Most important win in a tournament and most satisfying win in a tournament: Nationals at 17/Nationals in 2012
Best tournament ever won: World Championship in Ireland
How long have you been playing: 35 years
What do you do for work: Tri-Star Mercedes
What are your goals in handball going forward: To be number one again
What are your goals for the R48 season: Lot’s of tournament time to be ready for 2015
Favorite handball tournament: NYAC
How do you prepare for Race events: on the court drills and conditioning at the gym
What do you love about handball: competitiveness
Favorite pro player: Merv Deckert
How would you describe your game: defensive
What is your best shot: fly kill
Given the choice, what top R48 would you most like to play: David Fink
Who has inspired you to play this game at such a high level: David Vincent recently
Who do you think is the best player of all time: Paul Brady

Did not attend any race events:  Status:  Retired

Chapman is battling through an MCL tear on his right knee that is hampering his movement and mobility; an injury sustained during the Simple Green US Open finals of 2010. Regardless of his recent health, Chapman is still dangerous and lethal. Known for his spot on technical and methodical approach to handball, Chapman has become the game’s leading instructor and is widely considered the best student of the sport. In 2011, and after multiple visits to the finals pending a four-year lay-off from the game, Chapman won his ninth four wall national singles title after gathering another three wall title a year earlier. When placed alongside the game’s greats in every offensive and defensive skills, Chapman’s name pops up multiple times. Heading into his 40’s now, The Great One, is still great and packing the stands at every stop he attends.