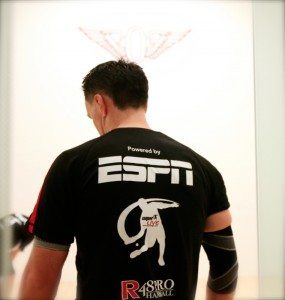 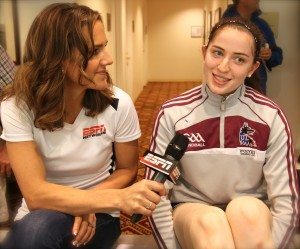 Catriona Casey entered San Francisco’s WR48 Final as the most decorated handball player in the world during the past year, winning nearly every major title in women’s handball in the United States and Ireland. Jessica Gawley entered the final on the heels of four top four finishes in four WR48 starts and aiming for her major breakthrough.

To say Casey completely dominated play in the final would be a dramatic understatement, as Casey never allowed Gawley on the scoreboard. Playing ruthlessly, Casey simply obliterated Gawley, only allowing the Canadian lefty to serve three times in two games.

“Watching Catriona is like watching a ballerina,” revealed tournament sponsor and 70-year handball veteran Kevan Del Grande. “I’ve never seen anything like it. She is just so good and makes the game look so easy.”

Casey allowed just seven total points in three rounds in San Francisco, officially outscoring her opponents 90-7. Last year players questioned who could beat Catriona Casey. Perhaps now the only question is who can score a point off Catriona Casey. 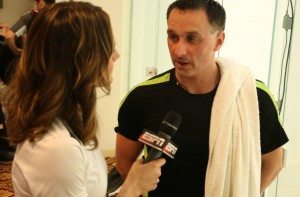 Paul Brady advanced to his fourth consecutive Race final during the R48 IV season and eight final in nine Race starts. Brady would come within one Race victory of tying Luis Moreno for most Race wins (nine) with a victory over his frequent adversary Emmett Peixoto. Peixoto advanced to his first final of the R48 IV season and second final in 21 Race starts. Peixoto amassed more experience playing Paul Brady over the past 12 months than any other player, challenging “The Gunner” for the fifth time since the R48 III at the New York Athletic Club in March of 2014.

Game two was closer in the early stages, as Peixoto worked his way into rallies and took advantage of his offensive opportunities. Peixoto appeared to be fatigued midway through game two, failing to let the ball drop and not moving his feet behind the ball, resulting in several errors and the inability to convert offensive chances. Despite battling fatigue and the world’s greatest player, Peixoto struck a completely flat left-handed back wall kill that ignited “Peixoto’s Army” and cut Brady’s game two lead to 12-10. Undeterred, Brady would complete his fourth victory in four R48 IV starts and eighth Race victory in nine career Race starts by scoring the game’s final three points.

“I just try to stay focused on the ball and not allow anything to distract me,” declared Brady after his 15-7, 15-10 victory over Peixoto. “I’ve seen it all and I just focus on what I’m trying to do. I’ll take a little time off between now and New York and be ready for the next stop.”

Brady is aiming for the first undefeated on the Race 4 Eight tour and needs victories in New York and Salt Lake City to complete the perfect season.

The R48 and WR48 Playoff finals produced more incredible action on Sunday morning. Vic Perez led Luis Cordova 24-22 in the R48 9th place final and served twice for the match but Cordova stayed alive and forced overtime. In overtime, Cordova scored two quick points to claim 9th place for the first time this season. Sean Lenning overcame a slow start in the first half against Marcos Chavez to claim 5th.

Courtney Peixoto de Melo played her best match in five years against former rival Yvonne August. CPM raced to a 13-1 lead behind an incredible serve, back wall kills, and incredible corner kills. August would not relent, battling for every point and extending a number of rallies. CPM was too strong in the end, claiming 5th place, 25-14.

“This just feels so good to actually win something,” revealed an emotional Peixoto de Melo after the match. “I am almost three months pregnant, so this will be my last match for awhile and I am just so happy with how I played.” 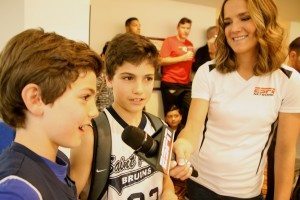 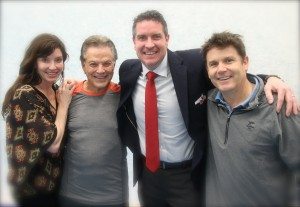 Thank you to tournament host Lou Barberini for his tireless efforts in hosting one of the greatest events in Race history. Thank you to Kevan and Sean Del Grande and the Del Grande Dealer Group for generously sponsoring the event and providing players and fans with the opportunity to travel to one of the greatest cities in the world. Thank you to the Olympic Club and their entire staff for their incredible hospitality and allowing the tournament to be held at one of the most prestigious athletic clubs in the country. Thank you to the WPH and EDTL Handball for sponsoring the event and enabling thousands of fans to watch over 20 hours of handball action live on race4eight.com and Watch ESPN. Thank you to Dave Vincent, David Fink, Lolita Vincent, Kris Gurrad, Linda Manning, Matt Taitano, Tanner Cleveland, Catriona Casey, Martin Mulkerrins and all of the players who participated and helped to make the Del Grande Group/EDTL Handball San Francisco R48 and WR48 Pro one of the best events in history. See you at the New York Athletic Club from March 13th-15th for R48, WR48 and SR48 action!

To watch replays of R48 and WR48 action from the weekend’s matches in San Fran, go to the Watch ESPN App (http://espn.go.com/watchespn/).