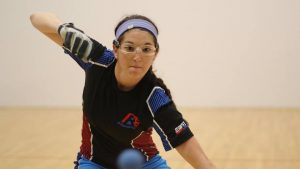 Tucson, AZ, WPH Press, 8/8/18- The world’s most interesting woman and newlywed Tech Sergeant (E-6) Suz Entzeroth will enter next week’s World Championships on the heels of an outstanding run in the spring, winning the MO State Singles and advancing to her first WR48 final at the ’18 NYAC, defeating Tracy Davis and Danielle Daskalakis en route to the Big Apple final. The St. Louis native brings a rare blend of strength, tenacity, speed, and a fierce competitive drive to the world stage, as well as a burning desire to face and beat the best. Entzeroth relishes the opportunity to challenge herself against the game’s best, a trait that has enabled her to rapidly climb the WR48 rankings. 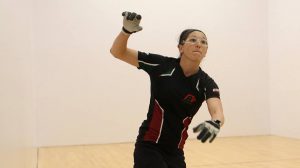 Suz plays and trains in her hometown of St. Louis, one of the best handball cities in the country. Suz takes full advantage of living in the “Gateway of the West,” finding the best games to prepare herself for next week’s championships. “I’ve been playing people that are wiser players than me. Then I’ll pick players to play against who hit the ball, what seems 100 mph at me. Then I’ll play lefties who challenge me. I have to get away from comfort zones.”

In her WR48 career, Suz has shown she has the rare ability to elevate her game against the game’s best, something she undoubtedly need against the strongest women’s open field in the history of the Women’s 4-Wall World Championships. “This open draw is no doubt the toughest I’ve ever played in.  No game is a walk. I’ll have to play every game as hard as I can, but I love that! To play the best in the world is amazing and I know I’ll learn a lot.” 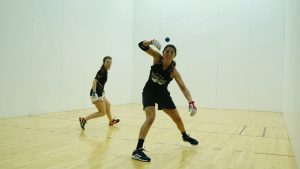 The pressure of the World Championships will not trouble Suz nearly as much as the quality of the field. “The pressure is on yes.  But not because it’s every three years, but because of how tough every match will be.” 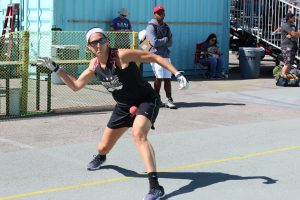 The 2015 World Championships was the catalyst for Suz to dedicate herself to the sport, a moment she has never forgotten three years ago. “Last Worlds (my first) sparked something in me that no other tournament had before.  I was intimidated at first being in the open, but I tried anyway.  Won my first round, but then lost to Casey next round.  That fired me up to improve over the next three years, because I love competing against the best.  This tournament I am not intimidated because I have proven myself as a pro handball player since last Worlds, and my confidence in my game is much higher.”

Suz knows that there will be no easy matches in Minnesota. “Everyone is a threat. Everyone is a great player.  No one I play is going to be an easy match. I will just play MY game. I am not going to play to theirs.”

Suz will face New York’s cross over star Danielle Daskalakis in a rematch of the 2018 WR48 NYAC semifinal in the round of 16 at next week’s World Championships, with the winner to face WR48 #1 and World Championships top seed Catriona Casey.

Suz Entzeroth Most Interesting Woman in the World HERE

To view the Women’s Open Singles draw at the World Championships, go HERE