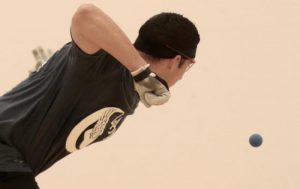 Tucson, AZ, WPH Press, 8/10/18– With Race 4 Eight victories against Peixoto, Lenning, Carroll, Shanks, Fink, the Flying Cordovas, Ortiz, and Chavez, the Los Angeles Athletic Club’s Vic Perez has quietly authored one of the most impressive Race 4 Eight careers in the seven-year history of the tour. Perez is the most reserved athlete in pro sports, but underneath that placid exterior, Perez burns to succeed and play for the biggest titles.

Perez will be playing in his first World Championships next week in Minnesota and is relishing the opportunity. “After playing handball for over 15 years and to finally be competing at the pro level, participating in the World Championship feels like an accomplishment in itself. It means that I finally get to showcase my style of play to players that haven’t seen me in action. All those hours of practice and training will finally reflect in this kind of tournament and I really hope my preparation pays off.”

A former standout high school football safety, Perez understands the importance of preparation for a major event. “I have been using more functional workouts in my training, such as medicine ball and TRX bands. I’ve used less weight with more repetition to avoid stiffness. Stretching out for 20 minutes after every work out has become part of my regimen. Lastly, I’ve been watching closely what I eat and I’ve been blending a lot of fruits and vegetables.”

No stranger to playing and beating the best, Perez welcomes the challenge of playing the best players in next week’s World Championships. “The competition at the World Championships inspires me because it’s the best players from all the top countries. I would think about the high level of play during my training often to help me finish out my last reps. Knowing that a strong draw was going to happen it gave me that extra energy and motivation.”

Like most of his Race 4 Eight peers, fans, pundits, Perez lists the R48 #1 and the five-time defending world champion as the favorites entering next week’s championships. “Brady and Carroll are the biggest threats because they are in great condition and they have played well in the World Championships before.” Perez added that regardless of the credentials of the favorites, he will be ready. “Despite their success I wouldn’t mind playing either player because I feel like I can compete with them.”

Perez will open his first World Championships campaign against Irish Wall Ball star Conor McElduff in the round of 32 and face Ireland’s most decorated all-around champion Robbie McCarthy in the round of 16. “I will have to pay close attention to the way the Irish players swing the ball because their style looks more underhand. My approach would be to expect any possible shot because of the Irish whip. Being on my tippy toes should help be faster in anticipating the shots from the Irish players.”

Summary: Vic Perez is the most calm and even-tempered top athlete in professional sports, always maintaining his concentration and focus, regardless of the score or the magnitude of the moment. Perez owns Race 4 Eight wins against Killian Carroll, Charly Shanks, Emmett Peixoto, David Fink, and Mando Ortiz, earning the Southern Californian the reputation as “The Giant Killer.” Perez is a dangerous sharpshooter, always adjusting to his opponent’s strengths and neutralizing what even the best do well. Perez’s right hand to the left corner kill is one of the most lethal on tour and has become one of the most feared weapons on the R48