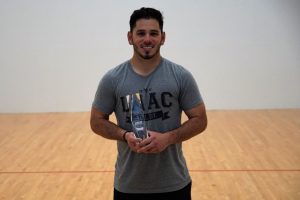 Tucson, AZ, WPH Press, 8/13/18– Two-time R48 champion Mando Ortiz is the game’s most explosive player, capable of ending rallies from anywhere on the court with highlight reel kills. Watch Ortiz for 10 minutes and you’ll see more one-inch high kill shots than you’ve ever seen in your life, combined. The late great David Chapman once said about Ortiz, “He’s the only guy I’ve ever seen consistently flat roll the ball out from 38 feet with either hand.”

Ortiz will be competing in his first World Championships in the open bracket in Minnesota, an opportunity that means so much to the Los Angeles Athletic Club star. “I am thrilled and pumped to be attending the Worlds and finally being competing in the open bracket for the first time. It means everything to me. When I young I just wanted to compete for my country. The last time I competed at worlds it was in Edmonton, Canada, where I slammed the 17’s. Being here is a gift.”

To prepare for a deep run in Minnesota, Ortiz has focused on court time and his diet. “I prepared myself pretty well, playing handball three times per week and eating properly, which is my biggest demon of all. Balancing working nights the past three months and training has been tough, but no excuses. 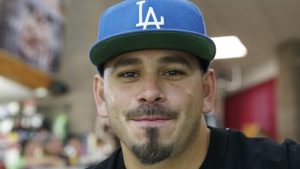 Not usually much of a draw follower, Ortiz has taken notice of next week’s outstanding men’s open singles draw. “This is arguably the toughest draw, to my knowledge. This is the toughest draw I will encounter in my history of handball and I am thrilled. Hearing the Irish have a powerhouse group of true elite players always inspires to be better mentally and physically.”

Ortiz’s strategy is to keep it simple. “You need to take matches one by one. It’s critical to pace yourself for tougher matches later in the draw. Play my game and hope I will finish on top. I don’t put any pressure on myself.  I just go in there and play my game and do the best I can do. I’ve been in many big matches over the past and that will help next week.”

The LAAC’s top ranked R48 pro sees a number of players capable of leaving Minnesota with the world title. “Since this is the strongest bracket, I feel there’s multiple players can win. I feel the Irish are the biggest threat of all. But truly I am my own biggest threat.” 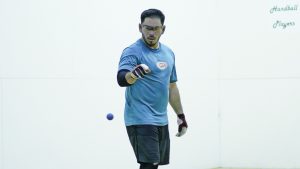 Matching the intensity of his biggest rivals will be a key for the former high school star running back. “No doubt I will play a Irish that is hungry for the title and I am excited to see new players in the mix.”

The last time Ortiz played in Minnesota he won the 2016 Minnesota R48, obliterating a strong field en route to snatching the R48 #1 ranking. Ortiz will kickoff his first open singles match at the World Championships against Minnesota’s Donovan Foley and will likely face Ireland’s young star Colin Crehan in the round of 16. Should Ortiz overcome Crehan, 2018 All Ireland champion Martin Mulkerrins will be waiting in the quarterfinals. “I won’t change my approach or change my game regardless of who I play. I feel my game is strong enough to win against any style.” 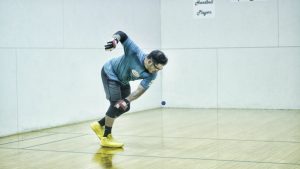 Strengths: two-handed offense, power, serve, ability to end rallies with either hand from anywhere on the court

Summary: Mando Ortiz demonstrated the ability to play with the best players in the world as a teenager, defeating then #1 Allan Garner and a host of other top players before turning 20. Ortiz experienced heart palpitations in his early 20’s and had open-heart surgery in 2010. Ortiz came back stronger than ever, defeating R48 #1 Paul Brady twice since 2014 and winning his first R48 title in January of 2016 in Houston by defeating four current or former WPH #1 pros en route to the title. Because of his ability to flat kill the ball from anywhere on the court with both hands and his magnetic personality, Ortiz is a fan-favorite and a player’s nightmare, possessing the ability to take the game out of the hands of the world’s best by serving and shooting his way to victory

Feature on Mando rising to #1 here