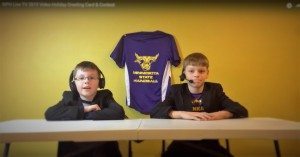 Two weeks back, the WPH Live TV Video squad issued a holiday video greeting card that featured handball, racquetball & paddleball players making holiday wishes from around the world.  At that time, WPH made a call out asking video participants to get creative; and that is exactly what happened!  The video with the most votes from the public would earn it’s producer free WPH Swag, plus $400 to the Junior Handball program of that producer’s choice.  Additionally, the second most-voted-upon video will earn it’s producer $100 to the Junior Handball program of their choice.  The #1 & #2 video with the most votes also receives a yearly WPH All Access Video pass; enabling the winners to watch all LIVE WPH tournaments (to include ESPN overages) for one complete year.

And the winner is…

Receiving just over 43% of all total votes, our top video vote-getter, submission #10: The Wells Kids, Spoof of Dave & Dave, from Mankato, MN.  At nearly 30% of the overall votes; nabbing the #2 spot is video submission #6, The University of West Florida, by Mike Morgan.  The third overall vote-getter comes from San Francisco, with the Jessica/Emmett Peixoto, Tea-Cup Submission #2 (nabbing 12% of all votes).  The fourth biggest vote-getter was from Danielle Daskalakis’ junior handball group.

WPH congratulates all participants, video submitters & helpers–thanks to all voters for getting involved with this fun annual feature.  We hope you had as much fun submitting your video, as we did producing it!  We’ll see you in 2016 for our third installment of this annual video feature.

Stay tuned for more promotions from the WPH team by going to www.wphlive.tv and selecting the “Promotions” tab across the top of the page.  (Here)