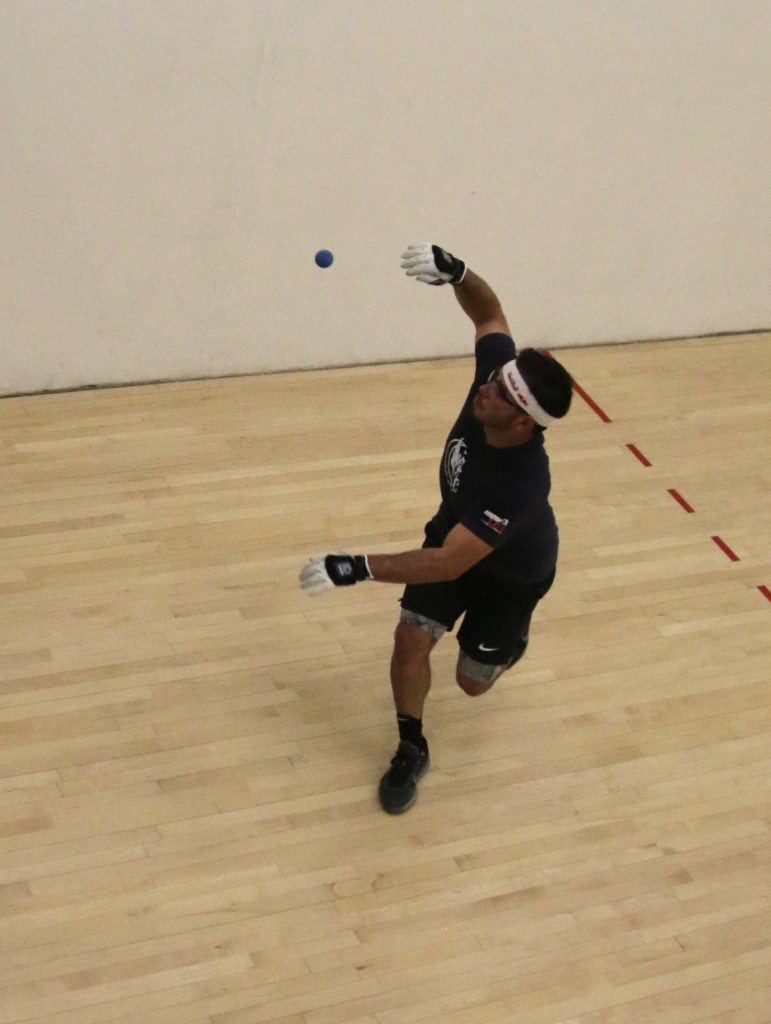 Race 4 Eight stars reduced the field from eight pros to two, with the quarterfinals and semifinals being completed on “Super Saturday.”

Mando Ortiz started quickly against Ireland’s Stephen Cooney, racing to an 11-0 lead in just nine minutes in game one. Cooney would score five points late in the frame but Ortiz closed out the first frame with his 11th bottom-board rollout. Cooney started quickly in game two, capitalizing on three Ortiz errors and two kill shot to take a 5-1 lead. The rest of the second game would be all Ortiz, as Mando scored 14 of the final 18 points of the game. “I really set the pace I wanted in the first game,” revealed Ortiz. “Cooney played really well in the second but I was able to pull it out.”

Emmett Peixoto started fast in game one, racing to a 12-0 lead and closing out the first game 15-1. Game would be nearly identical, with Peixoto breaking the R48 record with the least amount of points surrendered in a two-game match. “I controlled the pace of the game with consistent serves,” revealed Peixoto. “I feel like when my serve is on I gain confidence and can play really well.”

Lenning survived a first game deficit against a game Luis Cordova to take a one-game lead, 15-10. The second game mirrored the first, with Lenning never able to separate himself by more than two points in the game’s first half. With Cordova playing inspired handball and arguably his best handball since 2012, the Juarez prodigy tied the game at 10 for the second consecutive game. Lenning raced to a 14-11 lead and match point, Cordova rallied, scoring two points and earning a setup that would have tied the game at 14. Cordova was unable to convert, and Lenning closed out the match, 15-10, 15-13.

Saturday’s first R48 semifinal produced an instant classic between Ortiz and Carroll. Ortiz raced to a 10-1 lead with sensational and unstoppable play, pinning Carroll in the deep court with power serves and first strike kills. Predictably, Carroll fought his way back into the match with great serving and tenacity, ultimately taking a 13-12 lead. Carroll was unable to convert a setup to score his 14th point and after a three-minute glove change, Ortiz rattled off three consecutive points to take game one, 13-12. Ortiz and Carroll battled to a 6-all tie in game two when Ortiz took over, finding the bottom board and overpowering his Irish rival. Ortiz scored nine of the final 10 points in the match to advance to his first final since the 2015 Player’s Championship in April.

Lenning passed Peixoto in the WPH Power Rankings following the 2015 Simple Green U.S. Open for the first time in 10 months and the junior rivals found themselves battling for a spot in the Tucson Memorial in their 62nd career matchup. Peixoto raced to a 4-0 lead in his first service inning and seemed to be in complete control, but Lenning scored 15 straight points to stun Peixoto and take a one-game lead. Lenning continued to dominate in game two, scoring 22 of 24 points to take a 7-2 lead. Peixoto scored four straight to close the gap, but Lenning took over again, building a 14-8 lead and one point from the finals. Lenning appeared to win the match with a diving fist kill, but the WPH Video Replay showed the ball skipped. After celebrating outside of the court and removing his gloves and eye guards, Lenning was informed of the replay decision. Peixoto scored one point but Lenning ended what became an incredibly contentious match with a kill.

The Big Ball stars also shined in singles and doubles, with the biggest Big Ball indoor field in R48 history dazzling galleries and ESPN viewers with sensational skills and acrobatics.

Juan Santos proved that he is not only one of the top two outdoor big ball players in the world, but also one of the best indoor big ball players in the sport. Santos defeated Rudy Cruz in two games in the Big Ball Pro Singles semifinals and teamed with Sal Duenas to defeat NYAC’s cross over stars Stephen Cooney and Jonathan Iglesias. Shorty Ruiz also advanced to the Big Ball Pro singles and doubles finals, defeated Luis Cordova in the singles semifinals and teaming with Timbo Gonzalez to defeat Rudy Cruz and Chava Cordova.

The Tucson Handball community hosted a special presentation for those beloved handball players that passed away just before the Race 4 Eight semifinals. “We loved to sit around the table after playing handball and tell lies and drink a beer and we really become a family,” revealed Scott Cleveland. “When we lose a member of the handball community it’s like losing a member of our own family and we want to hold this event every year to honor not only those we lost in Tucson but across the entire handball world.”

More than 50 junior handball players from Arizona, California, Ohio, New Mexico, Texas, and Mexico participated in various small ball and big ball junior handball divisions, as well as learning from several of the game’s best pros in an exciting junior clinic and skills competitions. Emerging R48 top pro and Irish Senior handball sensation Killian Carroll teamed with WPH Master Instructor David Fink to teach an unforgettable junior instructional and target-hitting competition. “Having a top pro like Killian stepping into junior clinics is incredible for the kids,” revealed Fink. “The kids were treated to world-class instruction from one of the game’s future legends and learned techniques that will help them become better players.”

Between the Junior WPH clinic, juniors participated in multiple small ball and big ball age and skill level divisions, with many of the junior players playing in three divisions. “Our kids are having an amazing experience at the Tucson Memorial,” stated WPH Juarez Coach Drft Fernandez. “We are so thankful to the WPH for providing our juniors with the opportunity to travel, compete against other juniors, and learn from the best coaches and the game.”

The World Players of Handball is a non-profit foundation aiming to grow the game of handball through innovation and inspiring the next generation of players through junior clinics with certified WPH coaches, junior tournaments and the Race 4 Eight tour. Donations are tax-deductible donation and support the growth of the game. 100% of the donations received by the WPH go towards junior handball development.  Donate on-line at here or send your generous gifts through PayPal (extremehandball@cs.com) or by mailing checks to:  WPH, 3561 E. Sunrise Dr. Suite 125, Tucson, AZ, 85718. You can also contact WPH Development Director David Fink at fink@race4eight.com.

To watch all of Sunday’s finals action live, go to the Watch ESPN APP (here). Make sure you have an account with your cable company so you don’t miss a point! To follow all of the news from the world of handball and the 2015 Tucson R48 Memorial/Junior WPH Benefit, go to wphlive.tv. To follow the draws and results from the 2015 Tucson R48 Memorial/Junior WPH Benefit, click here