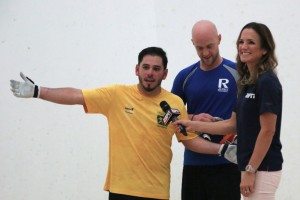 One of the Race 4 Eight’s most sensational events in history wrapped up on Sunday, as the Tucson R48 V Stop #2 Memorial/Junior WPH Benefit crowned champions in the Race 4 Eight, Big Ball singles and doubles, adult age divisions, and adult skill level divisions.  Additionally, the men’s R48Pro V finals brought a three game victory w/Lenning winning all sets in a very enlightened and unorthodox ending that had locals begging for more.  Three wins in a best two of three to 15?  That’s not possible!  (read on…)

White Hot Sean Lenning and sharpshooter Mando Ortiz met in the second Race final in seven months, with Lenning winning the Player’s Championship in the pair’s last encounter in the Race 4 Eight IV Match of the Year. Lenning dominated early in game one, scoring five points in his first inning. Ortiz caught fire trailing 0-5, scoring 10 straight points and taking control of the match. With Ortiz serving to take an 11-5 lead, the referee called for a glove change after Ortiz hit a short serve. Incorrectly expecting to be given a first serve, Ortiz was infuriated to learn he would be serving a second serve and unraveled, losing 10 consecutive points to lose game one and also losing the first seven points in game two. Trailing 7-0 in game two, the match was all but a formality, as Lenning applied pressure with power serves and first-strike kills. Ortiz regained his form but the deficit was too large to overcome, with Lenning pulling away to win 15-10, 15-7. “Winning here just feels extra special,” revealed Lenning. “It just feels like more of a recreational event and having so many of my friends and family here to watch really makes winning here so great.” 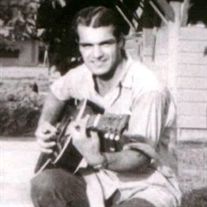 Lenning and Ortiz returned to the court just minutes after the conclusion of the final for a special “Cuevas Tiebreaker.” “Al Cuevas was a great member of our Tucson handball community that we sadly lost this year and he created the “Cuevas tiebreaker,” stated WPH board member and Tucson handball ambassador, Doug Clark. “When you lost the first two games you played a third and if you won that, you won the match. That’s the Cuevas tiebreaker.”

Lenning trailed 14-9 in the one game “Cuevas Tiebreaker” final to 15 before rallying to score the final seven points to win, 16-14. “We loved the Cuevas Tiebreaker and we’re going to make it a traditional every year at The Memorial,” stated WPH board member Jeff Healam.”

“The Cuevas-Break was the equivalent to a moment of silence, except our group played one more game to 15 to honor all of those that have played this game and passed,” said WPH lead announcer and executive director, Dave Vincent.  “I’m honored that the players agreed to put their gloves back on after such a long event, but not surprised.  Both players realized the emotional crowd, situation and embraced the moment. ”

Luis Moreno defeated Daniel Cordova in a 35-minute 5th place final, coming back from a 0-5 deficit and holding off a late Cordova rally to win 25-19. Marcos Chavez dominated Anthony Selestow to win 9th, 25-11. 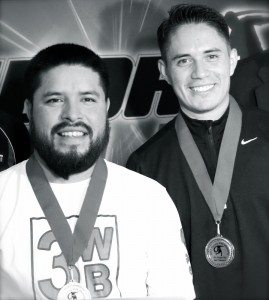 Juan Santos and Shorty Ruiz renewed the explosive Orange County/L.A. rivalry in the finals of the Pro Big Ball Singles. Santos started quickly in game one, building a 5-0 lead. Ruiz tied the game at eight before Santos raced to another five-point lead. Santos closed out game 15-8 and started game two where he ended game one, starting 5-0 and closing out Ruiz 15-8, 15-9. “It feels great to win my first indoor title,” stated Santos. “I’ve been training really hard for the past month and I’m looking forward to playing more indoor next season.”

Battle of the Border II

Tucson’s Fred Lewis Foundation and Junior WPH Juarez faced off for the second time in three months in the junior handball team competition “Battle of the Border.” Just as FLF had done in the first Battle of the Border in August, Team FLF won five of the seven matches to clinch the cup. “We love hosting the Battle of the Border and providing opportunities for the Tucson and Juarez juniors to compete as a team,” revealed WPH Youth Donor and Development Director David Fink. “The kids are really an inspiration for everyone playing and watching the event and we are proud to have them in the sport.”

Thank you to the Tucson Racquet Club; Bill Selby, Renee Sitter, Jenny, Sue and the work-staff, the World Players of Handball staff and volunteers; Charles Wicker, Tricia Fink, Brenda Hayes, Ana Paola, Carlos Manuel, Lolita De Vincent, Angel Estrella, Richie Estrella, Tom Flores, Javi Flores, Abe Montijo, Drft Fernandez, Trish Fink, Scott Cleveland, Jeff Healam, Doug Clark, Fred Banfield, Linda Manning, Ben Mannng, Kris Gurrad, Kara Mack, Matt Tiatano, Saul Duenas, Marcos Chavez, plus, the players, and all of those who donated and volunteered their time to make the Tucson R48 V Stop #2 Memorial/Junior WPH Benefit one of the season’s most special events.  As with all ‘thank-yous’ it is difficult to thank every single person that has helped, but please now, we realize that it takes a village and the collective group made this event happen.  “I’d like to thank Jesse Aranda for countless hours reffing, Richie Estrella for saving our bacon on Friday, plus Dave Fink for taking on multiple hats and the tournament desk for their efforts to keep all on time.  Thanks to Tom, Javi, Charles, Lolita, Carlos, Anna, Scott, Jeff, Jenny, Linda, and Kris for their amazing long hours of handball promotion.  Most importantly, thanks to all WPH Board of Directors who contacted me to ask how they could help make this event even better.”  -Dave Vincent

The World Players of Handball is a non-profit foundation aiming to grow the game of handball through innovation and inspiring the next generation of players through junior clinics with certified WPH coaches, junior tournaments and the Race 4 Eight tour. Donations are tax-deductible donation and support the growth of the game. 100% of the donations received by the WPH go towards junior handball development.  Donate on-line at here or send your generous gifts through PayPal (extremehandball@cs.com) or by mailing checks to:  WPH, 3561 E. Sunrise Dr. Suite 125, Tucson, AZ, 85718. You can also contact WPH Development Director David Fink at fink@race4eight.com.