19-year-old Briant Mendiola had a brilliant day Saturday defeating the No. 2 seeded Javier Badillo, then played Chris Tico in the semis. Chris is the 2017 USHA Master’s 40’s Singles champion, who just came off a nice win earlier against David Sanchez III. But the quick footwork and lethal shot making of Briant kept Chris off balance. Chris tried to slow down the hot hands of Briant with lob serves, but Briant made the adjustments and punched his ticket into the Finals. 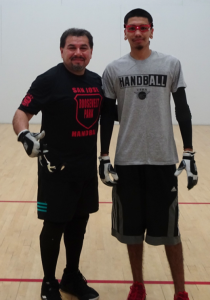 On the other side of the draw was 2016 USHA 45’s Singles Champion Arturo “Lefty” Suarez, who breezed by fellow San Josean Joel Vasquez to reach his fourth Super Bowl finals.

The finals started early (9 am) Sunday morning – Lefty was warmed up and gunning from the first point. Briant was still stiff from both doubles and singles the day before, and lagged Lefty in score until the end where he pushed to 19 points. But Lefty goes on lock down when the game is close, and with quick hands won 21-19. Briant tried valiantly to come back in the 2nd, but Lefty had plenty of power left, and took the win 21-19,21-14. As a Master’s player, Lefty now has an incredible five Open Super Bowl titles. 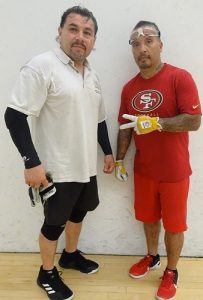 SR48 stars Joe Leonis and Raul Jasso battled in the finals of the Super Bowl 40+ singles, with Reno’s Smokin’ Joe overcoming the NorCal Grinder in two games. “That was the better bracket!” exclaimed Reno Joe.

Thank you to Mike “Scoop” Linnik for the report from the 34th Annual Fred Bancalari Super Bowl Tournament.