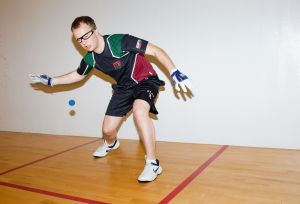 Stephen Cooney relocated to New York City in 2014 in large part to compete on the Race 4 Eight tour. It did not take long for the “Coon Dogg” to make his mark on handball’s greatest professional tour, moving into the top 10 after just four events during the 2014/15 R48 season and earning consecutive Elite 8 invites by season’s end. Cooney is a tenacious bulldog that won’t give an inch to any player and prides himself on making each of his opponents earn every point. Cooney is one of the game’s greatest counter-punchers, consistently making his opponents pay for shooting in front of him or leaving kills up. Cooney’s dedication to his craft makes him one of the game’s true professionals.

Stephen grew up in Ballaghaderreen, Co.Roscommon (Ireland) and now resides in New York City where he works as a project manager. Stephen started played handball at the age of age, fully dedicating himself to the sport at the age of 14 and eventually winning the All Irelands in his age group in 40×20, 60×30, One Wall and Hardball.

In this Patreon exclusive interview The NYAC’s Fist Killing Deputy, Stephen discusses his early experiences in sports, his inspirations to play handball, his favorite players to watch as a junior, the moments that inspired him to become a top player, training at the NYAC, cooking, what handball has meant to his life, what he loves about the tour, how he developed his fist shot, his advice for the next generation, plays Word Association and more.

What sports did you play seriously before playing handball?

I played all sports growing up. I took tennis quite seriously in my early years and also played soccer and Gaelic football for my local teams. Playing other sports is great for any athlete wanting to add a new skill set to their primary game.  I would strongly advise any kid growing up to not specialize in any sport until they reached late teens. 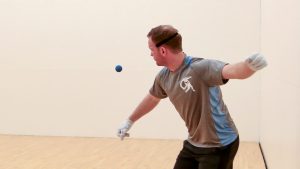 Who were your inspirations to become a handball player and eventually a Race 4 Eight pro?

I was inspired by the older mentors I had growing up in my club and I am really indebted to them as they taught me a lot down through the years. Dessie Keegan, Vinnie Moran, Joe McCann, Paul Flynn, Joe Dowling. I was also inspired by my coach, John Gaffney, who motivated me to try my best every time I played.

Who were your favorite Senior GAA players to watch as a junior player?

I really enjoyed watching the 60×30 finals in Croke Park growing up. Seeing Tom Sheridan and Ducksy play was always a treat.

Who are your favorite players to watch now?

I always really enjoyed watching Dessie Keegan play in the 60×30 and of course Paul in the 40×20.

…..twenty more questions remain of this brilliant interview with Stephen Cooney on Patreon.com/wphlive