Saturday at the Simple Green U.S. Open featured semifinal action in the men’s and women’s Race 4 Eight 4-Wall singles, as well as the semifinals of the men’s 3-Wall big ball and men’s and women’s 1-Wall big ball.  Fans on site at the Los Caballeros Sports Village in Fountain Valley, CA, were treated to continuous food, entertainment and drink while socializing with the greatest handball player of our time, Naty Alvarado Sr. 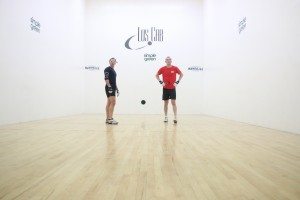 Paul Brady entered the semifinals undefeated against Charly Shanks but Shanks was determined to earn his greatest victory with a win over this generation’s player. Shanks attacked a surprisingly flat Brady in game one, shocking the world’s best player with relentless offense and pressure. Shanks claimed his first game win over Brady, taking a one game lead, 21-12. Brady’s fire was lit, as he played nearly flawless handball in game two, blitzing Shanks, 21-8.

“I had to raise my intensity level,” Brady would reveal after the match.

Shanks raced to a 4-1 lead in the tiebreaker and appeared to be on the verge of a huge upset. Brady quickly tied the score and continued his scoring streak, coming back to win 12-21, 21-8, 11-4.

“I haven’t played in a competitive match in a few months so I am still finding my game,” revealed Brady. “It can be difficult to continue to get up to play the same people I’ve been beating for years. I’ll be ready for tomorrow. 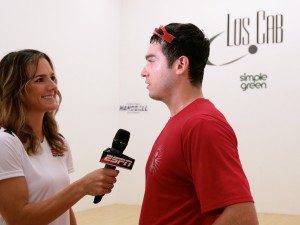 Luis Moreno had crushed Naty Alvarado in their two previous encounters at the end of the Race 4 Eight III season but Alvarado entered this matchup brimming with confidence on the heels of a tiebreaker victory over Mando Ortiz in the quarterfinals. Tied at nine in game one, Moreno shifted gears and soared into another stratosphere, blasting the ball at unthinkable speeds with both hands and never giving Alvarado the opportunity to set his feet.

“Luis was just hitting the ball so hard there was just nothing I could do,” stated Alvarado. “It’s just not fun when you feel like you can’t do anything.”

“I just want to crush Brady tomorrow,” revealed Moreno in an uncharacteristic display of self-confidence. “I know I can improve for tomorrow in my shot selection.”

Casey and Reilly will face one another for the ninth time in 18 months. Casey will aim to continue her undefeated Women’s Race 4 Eight career and defend her Simple Green U.S. Open title, while Reilly will aim to end her two-match losing streak against Casey.

Former national doubles champions Nik Nahorniak and Tyree Bastidas overcame “Team LAAC 1” Carlos Chavez and Vince Munoz to reach the final, while the “Team LAAC 2” Marcos Chavez and Vic Perez trounced number one seeds Eoin Kennedy and Dessie Keegan. The final will not only pit two teams from the same club for the first time, but also the first ever sibling vs. sibling final in Simple Green U.S. Open history.

Timbo Gonzalez validated his number one seed and number one big ball 1-Wall ranking by easily advancing to the final. Gonzalez will face his New York rival Andres “Playstation” Calle in tomorrow’s final.

Tune in tomorrow to watch all of the exiting finals from the indoor and outdoor men’s and women’s divisions at Simple Green U.S. Open live on Watch ESPN App by going to http://espn.go.com/watchespn/.