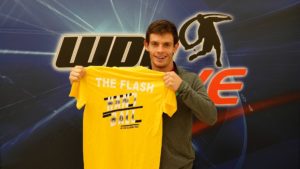 Tucson, AZ, WPH Press, 2/23/18– The first half of the Race 4 Eight season 7 has produced several of the most exciting matches in the seven-year history of the tour, two new Race 4 Eight champions, two new venues, and major shakeups in the Race 4 Eight rankings. Checks out the recaps of the first four stops of the 2017-2018 Race 4 Eight 7 season and preview the remaining three stops. 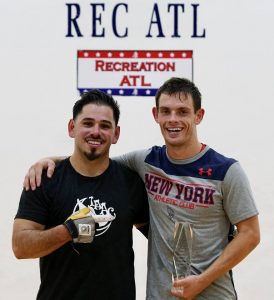 R48 #1 Killian Carroll picked up where he left off last season, dominating the field in Atlanta to win his fourth Race 4 Eight title in five starts in 2018. Carroll cruised past the tour’s youngest star, Tyler Stoffel, in the opening round, ousted the tour’s oldest star, Marcos Chavez, in the quarterfinals, and survived four close games in the semifinals and finals against Sean Lenning and Mando Ortiz, respectively. Luis Cordova and Daniel Cordova served as the unofficial hosts in their hometown event, taking sixth and third, respectively, to kickoff their R48 7 campaigns. 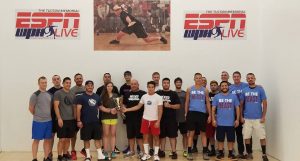 The 2018 Tucson Memorial honored those handball players and supporters the handball community sadly lost in 2018, with 2018 losing one of its greatest players in history, David Chapman, and one of the WPH film crew’s hardest workers, Ben Manning. The Memorial was played in the honor of Chapman and Manning, as is the entire Race 4 Eight 7 season. 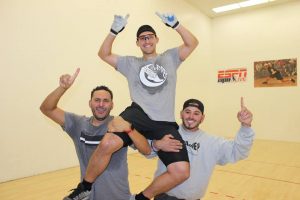 The 2018 Tucson Memorial kicked off with the Manning Cup, a Ryder Cup team competition pitted the best handball clubs in the world in singles and doubles team matches. The Los Angeles Athletic Club’s trio of Marcos Chavez, Vic Perez, and Mando Ortiz clinched the Manning Cup, defeating Team Tucson in an exciting final. To read the full recap from the 2018 Manning Cup, go here 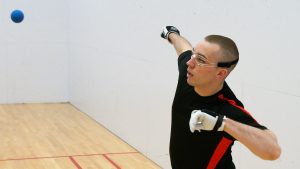 In the R48 Men’s Pro, three-time R48 champion Robbie McCarthy made his ninth start of his R48 career at the ’18 Tucson Memorial, boasting three R48 titles in his first eight R48 starts dating back to 2011. McCarthy swept second-seeded David Fink in the opening round, cruised past Irish compatriot Peter Funchion in the quarterfinals, but found himself trailing 3-15, 1-14 against a white hot Sean Lenning in the semifinals. 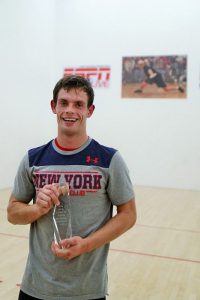 McCarthy staged the greatest comeback in the history of the Race 4 Eight, fighting off match point four times to eventually tie the score at 14 to force overtime. McCarthy survived overtime and dominated the third game to advance to the final. For Lenning, it would be the first of three historic R48 matches in three R48 7 events (keep reading).

R48 #1 Killian Carroll showed no signs of slowing down at the Tucson Memorial in the upper bracket, defeating Shorty Ruiz, Daniel Cordova, and Mando Ortiz en route to the final.

Carroll was too strong for McCarthy in the final, pulling away from the “Buzzsaw” midway through the first game to clinch his fifth R48 title of 2018 and solidify his #1 ranking. 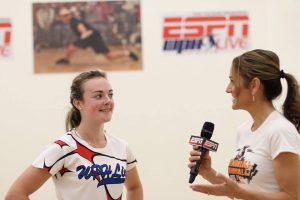 Catriona Casey was aiming for her 13th WR48 title in 14 WR48 starts at the Tucson Memorial and appeared to be in complete control in the final, as she led Martina McMahon 16-14, 6-0 in the final. McMahon rallied to stun the WR48 #1, outscoring Casey 30-6 in one of the most unexpected turnarounds in the history of the tour. “Martina’s hop on her serve and power really changed the match,” stated R48 pro Shorty Ruiz. “Martina was able to put Catriona under extreme pressure and from there started to execute her shots.” McMahon’s comeback earned the Irish left-hander her first WR48 title and yellow jersey. 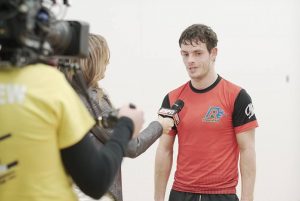 Killian Carroll made his way to his third consecutive final of the season, defeating Abraham Montijo and Luis Cordova en route to the semifinals. Awaiting Carroll in the semifinals was Sean Lenning, just three hours removed from one of the most thrilling third-game endings in Race 4 Eight history.

Lenning trailed Ireland’s Diarmaid Nash 15-8, 13-8 in the quarterfinals and appeared to be headed for his first quarterfinal defeat of the season. 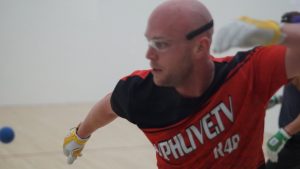 Lenning scored seven consecutive points to force a third game, but once again, was on the wrong end of a 13-8 Nash lead late in the third game. Just as he had done in game two, Lenning rallied, tying the score at 13 and after a furious rally at 13-all, Lenning served for the match at 14-13. Lenning was given a huge front wall-back wall setup just eight feet from the front wall to win the match, and with Nash out of position, inexplicably hit himself with the ball to keep Nash’s hopes alive. The pair would each hold four match points, as the match entered into the longest third game in R48 history. Lenning eventually toppled the Irish left-hander 19-17 to advance. “That’s just what I do,” stated Lenning to ESPN reporter Kara Mack after the match in reference to hitting himself with the ball. “I just expect it now.” 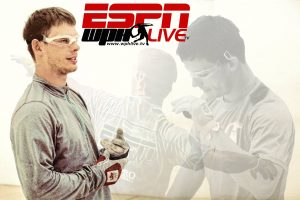 Carroll cruised past Lenning in the primetime Red Death semifinal to advance to the first R48 Red Death final.

Mando Ortiz advanced to his second final of the season in the bottom bracket, surviving a three-game battle with Shorty Ruiz in the opening round, dominating his LAAC teammate Marcos Chavez in the quarterfinals, and surviving another three-game battle against David Fink in the semifinals.

Ortiz became just the second player during the R48 7 season to win a game against Killian Carroll in the final, taking game one, 15-12. Carroll evened the match by dominating game two and held a seemingly substantial 12-6 lead in the tiebreaker. Ortiz started his charge but fell just short, as Carroll won his third title of the season, 15-11 in the third game. 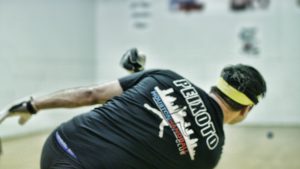 Las Vegas hosted its first official R48 event in history in the middle of February, as the top R48, WR48, and SR48 stars battled for R48 crystal and yellow jerseys in Sin City.

Killian Carroll found himself in his fourth final of the season, dispatching Dalton Beall, Emmett Peixoto, and David Fink en route to the final.

Sean Lenning entered the Royal Flush as the #3 seed, having advanced to three consecutive R48 semifinals to start the season. Lenning was dominant en route to the semifinals, defeating Erik Torres and Daniel Cordova to setup a clash with Luis Cordova. Lenning had lost four consecutive matches against “Lucho” last season before ending the losing streak in Atlanta in October. “The Freak” trailed by one game in the semifinal, but evened the match and overcame a 0-4 third game deficit to score 15 consecutive points to advance to his first R48 final in more than a year. 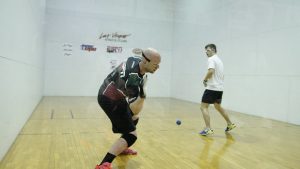 Lenning started slowly in the final, just as he had the night before in the semifinals. “I just couldn’t get my wing warmed up,” Lenning would later say. Lenning did warm up his wing in game two, consistently finding the bottom board from virtually every spot on the floor. “I’ve watched Sean play for years and I’ve never seen him shoot the ball like that,” stated USHA grand master and Lenning superfan Charlie Wicker.

Despite Lenning’s hot streak, Carroll seized a 9-0 lead in the tiebreaker and appeared to have both hands on his fourth R48 crystal of the season. Lenning dug deeper than maybe even he thought he could, applying pressure and ending rallies from every conceivable spot on the court to tie the score at 12. Lenning clincjed his first R48 title in 22 months with a 26-foot left-handed kill down the left, ironically, in virtually the same spot on the same court that he had separated his left shoulder 12 months prior. “I was tired but adrenaline can do crazy things,” stated Lenning.

“Handball needed that (comeback),” barked Wicker. “That was what the tour needed and that was one of the best matches in the history of the sport.” 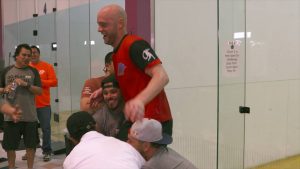 Catriona Casey bounced back from her shocking collapse in Tucson to decimate the WR48 field in Las Vegas, outscoring her three overmatched foes 90-9. Despite falling in the final, former national finalist and mother of two Courtney Peixoto de Melo advanced to the final with impressive wins against WR48 top five pros Tracy Davis and Aimee Tuohey. 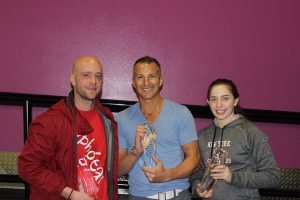 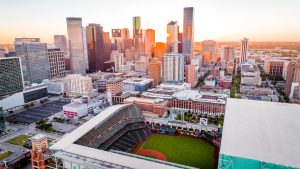 The Race 4 Eight Men’s Pro and SR48 will be back in action March 9-11 at the R48 7 Stop #5 Houston/2018 USHA National Masters Doubles. The top eight Race 4 Eight pros will be in action, as well as the top four SR48 finishers from the SR48 Las Vegas. Joining the R48 and SR48 top stars will be a strong contingent of qualifier and SR48 hopefuls from Arizona, California, Texas, New York, Illinois, Maryland, Canada, Mexico, and Ireland. 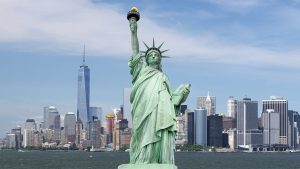 The Race 4 Eight returns to the prestigious New York Athletic Club across from Central Park in midtown Manhattan for the fifth consecutive year, featuring the R48 Men’s Pro and the WR48. Paul Brady won all four NYAC R48 stops from 2014-2017, while Catriona Casey has been equally dominant on the women’s side, wining each WR48 stop held at the NYAC during the same time period. The tour’s showcase event in the Big Apple is the final regular season event of the season, as the R48 and WR48 stars will jockey for position in May’s Player’s Championship 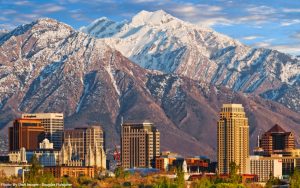 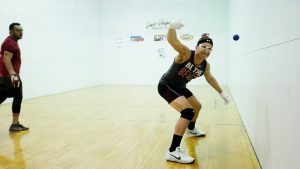