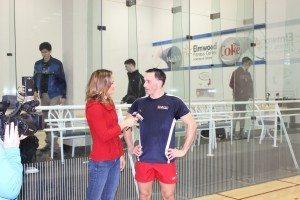 Sunday at the WPH R48Pro V Stop #3 & Mardi Gras Open produced the first Race 4 Eight Champion of 2016 and the first New Orleans Champion. Playoff matches were also decided, as precious ranking points were on the line in the quest for Portland’s WPH R48 Player’s Championship in May.

Finals: The New Orleans R48 V Stop #3 final featured a rematch of the 2015 World Handball Championships final between the R48 #1 and 5-time defending world champion Paul Brady and newly minted R48 Elite 8 member Killian Carroll. Brady was seeking his 12th R48 title in his 14th start, while Carroll advanced to his first R48 final with sensational comeback victories against Emmett Peixoto, Mando Ortiz and Sean Lenning. Brady started quickly in the final, building 6-0 and 10-4 leads with pristine shot making and court generalship, but Carroll demonstrated his prodigious talent, rallying to cut the deficit to 11-12. With rallies that defied the imagination and shots that left even Hall of Famer and WPH Broadcaster John Bike speechless, Brady and Carroll hypnotized the Big Easy gallery. Brady and Carroll both committed several uncharacteristic errors late in the frame but Brady was ultimately able to overcome the second-half Carroll rally and seal the first game with a bottom-board rollout. Carroll appeared to continue the momentum he built in the second half of game one early in game two, racing to a 3-0 lead, but his momentum was quickly halted by the Brady express. Brady scored 10 consecutive points to take a 10-3 lead and cruised to his 12th R48 title in 14 starts, kicking off his 2016 campaign in the same fashion in which he dominated the past 12 years. 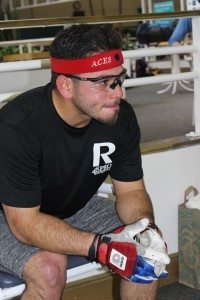 5th Place Playoff: Mando Ortiz appeared to be en route to his third semifinal in his fourth R48 start after taking game one against Killian Carroll in the quarterfinals but lost in a tiebreaker, while Luis Cordova enjoyed the best victory of his R48 career in the opening round against 9-tine R48 champion Luis Moreno before losing to David Fink in the quarterfinals. Ortiz and Luis Cordova advanced to the 5th place final with Playoff victories against Stephen Cooney and Daniel Cordova, respectively. With both Ortiz and Cordova feeling the effects of a physical weekend of handball, Ortiz seized the initiative, shooting the ball from virtually everywhere on the court and keeping the rallies as short as possible. An Ortiz hot streak catapulted the sizzling Southern Californian to a 19-6 lead. A late Cordova rally fell short, and Mando clinched 5th for the first time on the R48 V.

9th Place Playoff: In a match that could have easily been a R48 final, Luis Moreno and Emmett Peixoto met in the 9th Place Playoff. Moreno bounced back from a stunning first-round upset to Luis Cordova to defeat Abraham Montijo and Adam Bernhard, while “The Rock” regrouped after a devastating first-round loss to Killian Carroll to blitz Jonathan Iglesias and Ryan Bowler. Peixoto and Moreno played furiously in their nearly 70-minute war, with each R48 star trading power hops and kill shots. Peixoto built several six-point leads throughout the match and never allowed Moreno to tie the score. With both players pushing themselves to the limit, Peixoto summoned his best handball of the event in the second half, outlasting “The Natural” in a thriller.

17th Place Playoff: Dan Armijo defeated Jonathan Pollard and Arthur Sayed to advance to the 17th Place Final and would face New York’s Billy O’Donnell, who bounced back from a qualifier final loss to RTB (Ryan “The Tank” Bowler) to defeat Vincent St-Amant and Tyler Stevens to meet “The Hand” in the final. In a highly entertaining match between a grizzled 30-year pro tour veteran and one of handball’s all-around stars, O’Donnell overcame “The Hand” by commanding the front court and executing a number of  perfectly struck fly kills. O’Donnell earned his first R48 ranking by capturing the R48’s second 17th Place Playoff. Congratulations!

Thank you to New Orleans Mardi Gras R48 V Stop #3 tournament director Bob Caluda for an outstanding event. Thank you to the entire WPH Staff and WPH Production Team of Dave Vincent, David Fink, Kris Gurrad, Linda Manning, Ben Manning, Samantha Kocher, John Bike and Kara Mack and to all of the players and volunteers who made Nola a spectacular event. Special thanks to Anthony Selestow for refereeing more than 10 matches during the weekend!

To watch replays of the WPH R48Pro V Stop #3 Powered by ESPN, go to the Watch ESPN APP (here).