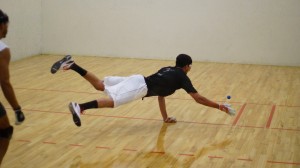 Montijo lays out in the breaker verses Alvarado

The Plummer Family Helluva Handball Bash & WPH Pre-Race Tune-Up began Friday [October 3rd] at the Peak Health and Wellness Center in Coeur d’Alene, Idaho, alongside former NFL Pro Bowl QB, Jake “The Snake” Plummer; avid handball fan and player.  For Plummer, this is his sixth year hosting the bash since his retirement from the NFL.  “I don’t consider myself one of the greatest quarterbacks ever,” Plummer says, as he explains how Handball compares to team sports.  “But, I had my teammates that played for me. I was able to pull out of them what I needed; whereas in Handball, where do you pull from?  You have to pull it from your inner self.”

Plummer spends the weekend connecting with the local handball legends, signing a few autographs, playing the sport that he truly loves– All while spending time with friends and family.  This bash is a festival of old-school handball and a true depiction of how the game is played and promoted.

Sean Lenning, our current 3 Wall National Champion, drove in from Seattle, Washington, and picked off journeyman, Dan Armijo, by the score of 7, 2; meanwhile, the same scoreline was given to Emmett Peixoto, as he was the victor versus J.T. Hingey in their quarterfinal match.  Luis Moreno, our current #1 ranked pro, also took down the local champ, Pete Svennungsen, in two entertaining but quick games.  Moreno will face longtime friend-rival, Sean Lenning in the upper bracket semifinal at 11am [not to be aired LIVE] today.  Emmett Peixoto, on the other and, takes his #2 seed into the semis to face 40 year old Naty Alvarado.

Naty “El Tigre” Alvarado, last year’s US Open finalist, sent signals that this would be his last on tour, after an amazing 22 year pro handball career.  However, a couple weeks back Tigre decided to give it one last season.  Last night, in what turned out to be the most entertaining [and heartbreaking] match of the opening day, Alvarado found himself down 18-11 [going to 21] in the first two games; identical scores in both to that point; yet, the 22 year vet found a way to win the match.  “Abraham Montijo is no joke,” claimed a local handball player.  “He improves every time I see him.”  Montijo should be feared.  Having stunned Alvarado in game one with a 18-11 lead, just to see it evaporate in less than 8 total minutes to the serve-n-shoot artist, Alvarado; who eventually took game one 21-18.  Like the first, Alvarado was flat and the young Tucson, Arizona, native pounced all over him; this time learning from game one and closing it out 21-11.  Unfortunately, just before the conclusion of game two, Montijo began cramping [an issue that has haunted him during his pro career at a chronic pace] and that cramping continued in the breaker.  Alvarado closes out the third set 11-5 and will advance to face this year’s 4 Wall National Finalist, Emmett Peixoto, at 12pm [not aired live].

To follow the results and all the action please visit wphlive.tv for updates and view the brackets, for all divisions, HERE>

Junior WPH conducts pro/youth clinic at 1pm w/Naty Alvarado and Jake Plummer and the public is invited.  Contact us for details:  wph@race4eight.com (520) 336-6231