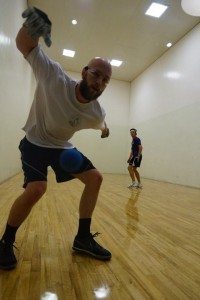 Jake Plummer and family are thrilled to host the sixth installment of the Plummer Family Helluva Handball Bash, October 3rd-5th in Coeur d’Alene, Idaho. The Plummer Family Bash is widely considered to be one of the best events in handball, combining spectacular handball with incredible Plummer family hospitality. This year’s Bash will be no exception, as five of the top eight WPH Race 4 Eight pros have entered, including WPH Race 4 Eight #1, Luis Moreno.

“I want to continue showcasing the exceptional handball skills of the game’s top players at our family tournament,” barked former NFL All-Pro turned handball promoter Jake Plummer. “The Plummer family is proud to host the best handball players out there each year.”

“This is not an official Race event but it is still a huge one,” declared WPH Executive Director, David Vincent. “We consider this a pre-Race warm-up event but I can assure you that all of the guys will be aiming to make of the sport’s most highly publicized finals.”

The Plummer Family Helluva Handball Bash 6 will also feature an exciting junior handball clinic, coached by WPH Race 4 Eight #3 pro, the ageless Naty Alvarado, Jr. Alvarado will demonstrate the skills that have made him one of the game’s most electrifying players, while inspiring the youngsters to play one of the world’s greatest lifetime sports.

The Plummer Family Helluva Handball Bash 6 will not be broadcast live, but like the World Players of Handball on Facebook, log onto wphlive.tv or follow the WPH on Twitter @dfwph and @wphlive for all of the updates from the PFHHB6! The World Players of Handball is a non-profit foundation aiming to grow the game of handball through innovation and inspiring the next generation of players through junior clinics with certified WPH coaches, junior tournaments and the Race 4 Eight tour.

Please consider making a tax-deductible donation today and supporting the growth of the game. 100% of the donations received by the WPH go towards junior handball development.  Donate on-line at www.thehandballstore.com, send your generous gifts through PayPal (extremehandball@cs.com) or by mailing checks to:  WPH, 4556 E Camp Lowell Rd, Tucson, AZ, 85712.