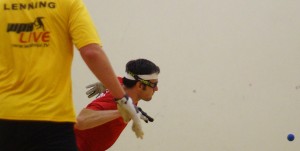 “The day of continuous food, drink and family fueled by top competition, friends and good old fashion hospitality made this the single most incredible tournament I’ve ever been to,” states WPH Executive Director, Dave Vincent.  “We didn’t film live, but we did capture great video clips, interviews and had a very inspiring youth clinic.”  Fans from around the great pacific northwest, plus many from other surrounding states, converged to watch top pro players and they were not let down.

In the day’s opening semifinal, Luis Moreno (#1) was stunned by longtime rival Sean Lenning (WA) in a three game thriller that featured controversial calls, great comebacks and a shootout unlike many have seen before.  After losing the first game, 11-21, Lenning comes out in game two looking like the Sean Lenning from seven years back; attacking his serve w/monstrous hooks and first strike offense; jumping to a big lead [11-2].  Moreno fights back, ties the game at 12, and then battles with Lenning until a late game surge put him up, and serving, to take the match at 20-17.  Lenning, however, didn’t give up…  shooting from the hip and creating quick points on nearly impossible gets; stunning the crowd in the process.  At 20-20, and Lenning serving, the referee appeared to award Moreno with a game saving call that erased a perfect Lenning pass.  Two plays later Moreno earns a side out and the writing appeared to be on the wall for Lenning.  Once again, the Washington Native makes a remarkable on-the-run 37 foot off balance right hand roll-out to force a side out and within thirty seconds Lenning served and shot his way into the breaker; winning game two 21-20.

In the breaker, Lenning and Moreno went back and forth with crowd pleasing energetic gets and thrilling offense with both shooters scoring no more than one point in a time; side out; point; side out; et al.  Tied at eight, Lenning calls a time out and gathers wind, then comes in to outscore Moreno three to one to take the match.  For Lenning, it was his first four wall final in 2014 and after hearing the booming shrill from the fans while exiting the court, there is no doubt there will be more big wins for Lenning in the next 12 months, as the WPH heads into Race Season IV.

In the lower bracket, Emmett Peixoto jumped out to big leads in both his games, just to see Naty Alvarado reverse his uninspiring play with streaky good-play that eventually tied the score (in both games) at eight apiece.  Peixoto eventually took off to defeat the 41 year old, 21-13, 21-11.

Peixoto is no stranger to big time finals; just recently appearing in the USHA 4 Wall Nationals [June/Minnesota] and WPH Race Stop Denver [March/14], plus Vegas 3 WB Outdoor Championships last month.  “We have seen Peixoto climb back up the ranks after his shoulder surgery.  Today, he is stronger than a few months back and all top dogs should be worried that The Rock is back,” shouted Vincent.

In the Finals, Lenning showed signs of a big match comeback, but was never able to put together runs long enough to dethrone the constant pace from Peixoto; likewise, fans were continuously displaying large outbursts of awe as both players were putting on a display of athleticism not witnessed in this neck of the woods in quite some time.  “Lenning fought hard, but Peixoto was just too consistent,” claimed Bill Pruit, local handball player.  “We players have a lot to learn and these guys are really giving us ammo.  Thank you WPH and Jake for making this weekend the most inspiring one that I can remember.”  Peixoto wins the $2,000 prize purse, Yellow Jersey (1st) and some much needed momentum, as the R48Pro Team heads into the big $200,000 Race4Eight Season; 21-13, 21-11.

On Sunday, all age, amateur, pro player playoff and master divisions conclude at the Peak Health an Wellness Center to close out one of the best tournaments in recent times.  See all results and track the action, HERE>

Want to learn more about the Race4eight Tour?  Use the tabs across the top of the WPH main website at www.wphlive.tv.  Wanna play?  Email us:  wph@race4eight.com.