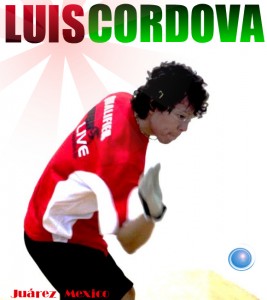 From: Juarez, Mexico
Born: November 13, 1990
Height: 6’0″
Weight: 170 lbs
Dominant hand: Right
Coach: Luis Cordova Sr.
Sparring partner at home: Every body at San Angel and Campestre Juarez
Best player that you ever beat in a tournament: If it has to be singles, Armando Ortiz. If doubles counts then my brother and I beat Sean Lenning and Dave Chapman.
Best tournament ever won: B Nationals at 14
How long have you been playing: 10years
What do you do for work: Weapons Systems for CV-22 in the US Air Force
What are your goals in handball: Get as far up the ladder as I can get
What are your goals for Houston: Qualify and make the semifinals for the first time.
Favorite handball tournament: Las Vegas 3 wall
How will you prepare for Houston: Running for conditioning and practicing my shots in the court
What do you love about handball: Everything. Throwing the handball in a court after a long time of not playing gives me Goosebumps
Favorite pro player: Sean Lenning’s style is my favorite
How would you describe your game: I think I have a little bit of everything at different times, except for a left hand lol
What is your best shot: Right handed corner kill
Given the choice, what top pro would you most like to play: I would like to beat Naty Alvarado, so him.
Who has inspired you to play this game at such a high level: Players back home. When I was younger I wanted to be able to win our local tournament one day.

“On his way up the ranks I was most impressed with his tenacity and court coverage. But over time he has developed into a well rounded, intelligent player.” -John Bike on Luis Cordova

Luis Cordova Jr is making a spash this season in what some call his “break-out” year. Defeating Andy Nett, Tommy Little and taking Alvarado to a breaker in the process of moving up the ranks, Cordova is setting his sights on the semis and beyond. Amazing power and get ability with superb touch and back wall game has put Cordova at or near the top ten all season long.

Cordova is just 23 years old and still amongst the youngest stars in the game. Born and raised in Juarez, Mexico, Cordova recently relocated with his wife and young son, Luis Mateo, to Pensacola, FL after several months of basic training in Texas for the U.S. Air Force Weapons Systems CV-22.

Cordova has been coached by his father, Luis Cordova, Sr. since he started playing handball 10 years ago and credits his father and the handball players in San Angel and Campestre Juarez for inspiring him to become a pro player. Cordova was also fortunate to have been sponsored by Phoenix’s Ken Dannenbaum and credits the opportunity that Ken provided him to travel to the nationals to compete against the top juniors and being able to watch the pros in making him the player he is today. “Ken got me hooked on handball by enabling me to travel to the biggest tournaments and I am incredibly grateful to him for that.”

“On his way up the ranks I was most impressed by his tenacity and court coverage,” stated Hall of Famer and Senior Race 4 Eight I Player of the Year John Bike, Jr. “But over time, Luis has developed into a well rounded, intelligent player.”

Cordova’s next Race 4 Eight start will come at the R48 III Stop #3 in Houston, TX, January 24-26, 2014. Cordova will aim to qualify for the second time this season after having taken seventh place in the Plummer R48 III Stop #1. Wins over top 16 pros Vic Perez and Aaron Garner at the Plummer Bash announced his reemergence on the pro handball scene.

“I want to get as far up the ladder as I can get,” stated Cordova. “My goals for Houston are to qualify and make the semifinals for the first time. To prepare for Houston, I have been running for conditioning and practicing my shots in the court by myself. This is the first time I have ever really cross-trained and spent so much time on the court practicing and I feel really great. I am excited to see how I play as a result of the training.”

Cordova is a self-confessed handball addict. “Just hitting the ball around the court after a long tome of not playing gives me goose bumps.” Cordova has played in WPH 1-Wall, 3-Wall, and 4-Wall small ball and big ball events, as well as playing fronton in Mexico. Cordova is highly proficient in all codes of handball with every type of ball.

Cordova has had several near misses against the top stars in Race play, including a 25-21 loss to WPH #1 Pro Luis Moreno at the R48 III Plummer Bash and a tiebreaker loss to Naty Alvarado, Jr. during the R48 I season. “Alvarado is the guy I would most like to beat on the tour.”

Cordova possesses the ability to change his game and play several different styles, making him dangerous against any player on the planet. Perhaps the most potent weapon in his arsenal is his devastating right-handed right-corner kill from virtually anywhere on the court. Cordova’s style resembles a young John Robles and his favorite current pro’s style, Sean Lenning.

Luis is not the only young superstar in his family. Luis’s younger brother Daniel is a two time collegiate All-American and surefire Race 4 Eight pro in the near future.

Follow Luis Cordova and all of your favorite stars on the Race 4 Eight tour by watching all of the live Race 4 Eight webcasts on race4eight.com.