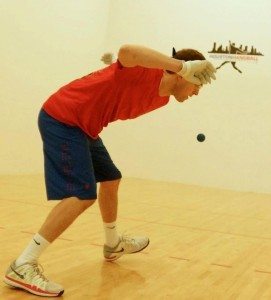 How long have you been playing: Since I was about 8 years old

What do you do for work: Teacher

What are your goals in handball going forward: To keep improving

What are your goals for the R48 season: Make it to Salt Lake City

How do you prepare for Race events: Play handball, do some cross training, and try to eat right

What do you love about handball: I love that it is a sport you can play your whole life.

How would you describe your game: I try to stay aggressive and shoot the ball when I get the opportunity.

What is your best shot: Probably my serve

Given the choice, what top R48 would you most like to play: Anyone ranked ahead of me

Who has inspired you to play this game at such a high level: My dad

Who do you think is the best player of all time: Paul Brady

Which current Race 4 Eight or top pro would you most like to play: Anyone ranked ahead of me

The Minnesota Dreamboat is known by his peers as the silent assassin. Unassuming and unfailingly humble, Nett has the game to beat anybody. According to former WPH #1 and one time victim of Nett, Charly Shanks, if Nett starts making his first strike kill with regularity he could be dawning yellow in the near future. Nett appeared in 10 consecutive Race quarterfinals from the R48 I LAAC Stop #7 through the R48 III Plummer Stop #1. Nett’s quarterfinal streak was broken at R48 III Stop #2 Simple Green U.S. Open.