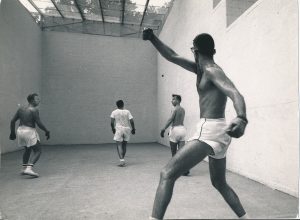 “The 1-Wall game has become much more conservative with almost no one playing the type of aggressive game that was standard until the ‘80s. Players rarely hit serves and shots near the lines. Some give up the tremendous offensive advantage of the serve in 1-Wall by hitting second serves up for fear of double faulting. With few exceptions overhand shots are stroked softly rather than driven hard. Off hands have become very strong and look a lot more impressive than that of most players of my and previous eras but the art of high off hand lofts as defensive returns taking an opponent into the backcourt seems to be a lost art.”

Howie Eisenberg started playing handball at the age of six and became one of 1-Wall’s most prolific, power-hitting stars of the 1900’s, earning an induction into the USHA Hall of Fame in 1996. Despite being talented in multiple sports, Howie’s focus always remained handball, as his quest to be the best never wavered. At a time when an estimated 500,000 1-Wall players filled New York City’s 2,000 public courts and hundreds of beach club courts, Howie’s dedication to his craft took him to the top of the sport as a teenager, a perch he maintained for nearly four decades. Howie played and learned from the best in the sport, to include Vic Hershkowitz, Oscar and Carl Obert, Wally Ulbrich, Marty Decatur, Kenny Davidoff, Jim Jacobs, Fred Lewis, Naty Alvarado, Sr., Steve Sandler, Tati Silveyra, David Chapman and so many more, eventually sharing the court with 30 Hall of Fame players.

In Howie Eisenberg: A Handball Life, Howie guides us through his handball journey in this special four-part Legends Series interview. Now 81, Howie’s memory is as keen as his power was revered, so enjoy this special tour through handball history as told by one of the game’s great players and historians.

In part four of Howie Eisenberg: A Handball Life, Howie discusses the greatest players of his era, his most difficult opponents, his regular doubles partners, how the 1-Wall small ball game has changed from his era, the legendary 1-Wall match between Steve Sandler and Jimmy Jacobs, how 1-Wall can gain mainstream recognition, how he stays fit in his 80’s and plays word association with the greats of his and today’s 1-Wall greats. Enjoy!

Tune into Patreon for all four parts of Howie Eisenberg: A Handball Life. Enjoy!

Who were the best players of your era?

I will respond to this question considering the ‘60s which was the period of my prime although I did win 3 times and come in second in national open doubles tournaments 6 times between ’71 and ’80.

Ken Davidoff had a great serve, hit very hard, good offhand both overhand with good angles to the left and underhand with high loft defensive service returns that carried to deep court. His natural lefty hook angles to the right took you way off the court. His serve was awesome, followed by fly kills or straight kills or drives. Kenny also had a fierce will to win which belies the warm hearted person he is.

Read the four-part interview series on Patreon.com/wphlive, plus more interviews, analysis and videos from the legends and pros of the game on Patreon!