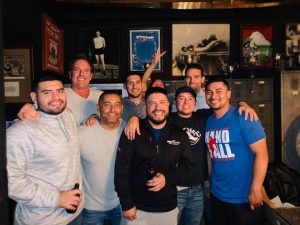 R48 #12 Shorty Ruiz entered the 2019 LAAC R48 Pre Qualifier as the favorite on the heels of his quarterfinal finish at the 2019 Tucson Memorial, where Ruiz defeated two-time R48 finalist Emmett Peixoto for the second consecutive time in 2019. “Weekend at Bernie’s” R48 #22 Adam Bernhard came up just short at the Austin R48 Pre Qualifier in the middle of November and traveled to L.A. in search of a jumpstart to his Race 4 Eight IX season. Widely considered the best player to have entered a R48 qualifier and never qualified, the LAAC’s Dylan Hernandez led a pack of aspiring R48 pros. Joining Ruiz, Bernhard, Hernandez and a large group of young stars was former top eight pro and current 50+ national champion John Libby. What a field! 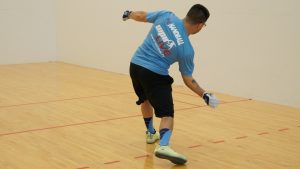 Shorty Ruiz defeated the LAAC’s Christian Luna to advance to the semifinals to setup a clash with the LAAC’s Carlos Chavez. Chavez stunned Ruiz in game one, keeping the Tucson star off-balance with deep passes to take the first. Ruiz bounced back, dominating the next two games to advance to the final.

Adam Bernhard drew L.A.’s Ricardo Palma in the quarterfinals and needed three games to overcome the current “A” national finalist. Bernhard would again be pushed to the limit in the semifinals, facing the LAAC’s Dylan Hernandez. After splitting the first two games, the pair traded left-hand kills in the third. Bernhard appeared to be in command in the third, holding match point at 10-4. Hernandez drilled a return of serve kill to earn a side out and climbed to 9-10. A side out on a Hernandez error followed by a diving re kill from Bernie sealed the match for the Texan, setting up a clash with Shorty Ruiz. 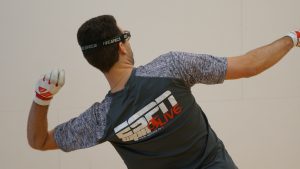 Bernhard would find himself in his third consecutive tiebreaker in the final (a R48 Pre Qualifier record), as he and Ruiz traded the first two games. Bernhard switched to a left-hand Z serve into the back left corner in the tiebreaker, frustrating Ruiz and forcing errors and yielding setups. Bernhard took control of the rallies on Ruiz’s weak Z serve returns, driving Ruiz into the back corners with two-wall passes and fist drives. Two late diving re kills from Bernhard dashed Ruiz’s hopes, as Bernhard won the title, R48 travel stipend, and direct entry.

“Adam was really tough,” stated Ruiz. “I got stuck in the slow game. I kept returning the ball and trying to kill in front of him and he kept re killing.” 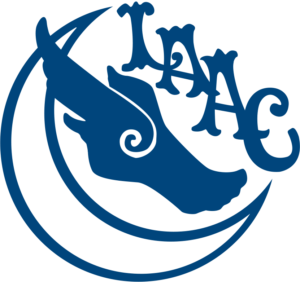