The 11th RFC concluded on Sunday with 1-Wall small ball pro singles, as top stars from the U.S., Canada, and Ireland enjoyed a beautiful Sunday on the East Liberty 1-Wall courts in Pittsburgh. 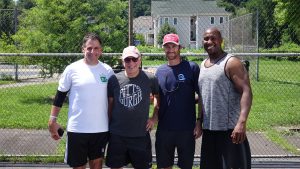 David Fink was aiming to stay undefeated in the RFC 1-Wall small ball singles and advanced to the final in the upper bracket with convincing wins against “Tex” Bussey and Cleveland’s outdoor specialist Carlos Vazquez.

Fink started well in the final, overcoming two double faults to take an 8-3 lead. O’Connor caught fire from there, serve deep power hooks and finishing points with first-strike fly kills with his right and left hand. O’Connor scored 11 straight points to serve for the game at 14-8, but an error opened the door for Fink. Fink capitalized, scoring four straight points with two aces and two right handed kills to serve at 12-14, but an out serve handed O’Connor the side out. O’Connor took a one-game lead on a Fink return of serve error. 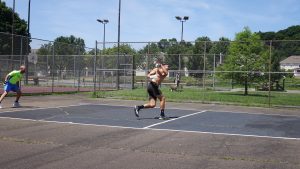 Fink built a huge lead in game two, finding the court with his serve and controlling the neutral rallies en route to a 14-3 lead. O’Connor charged back, scoring seven unanswered to close the gap to 10-14. A double fault from O’Connor gave Fink the opening he needed, as Fink forced a third game with a left-handed kill.

Fink raced to a big lead in game three, leading 6-0 and stretching the lead to 12-2. There would be no O’Connor comeback this time, as Fink closed out the match and his third RFC 1-Wall small ball singles title.

“I hope this is the start of a great lefty rivalry,” barked Fink in reference to O’Connor. 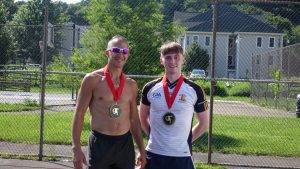 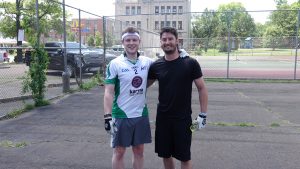 Niall O’Connor entered the RFC 1-Wall big ball singles as the top seed and seeking his third RFC 11 final. O’Connor’s bid for the RFC finals hat trick ended at the hands of St. Louis’ outdoor star, Tex Bussey.  Bussey won the battle of the lefties, however and advanced to the final in the upper bracket.

Ireland’s junior star David Walsh avoided his third overtime time loss of the event, ousting Vazquez 21-19 to advance to the final in the bottom bracket. 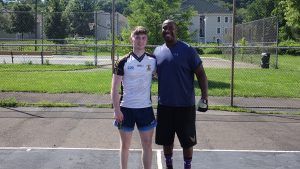 Ceding 23 years to his finals counterpart, Bussey pushed the junior phenom in the first half. With Bussey leading 6-5, Walsh switched to a power serve and cruised to an 11-6 halftime lead in the one-game final to 21. Bussey was never able to climb back into the match, as Walsh’s deep serves and Irish whip kills kept the Corpus Christi native off-balance and in the back court. Walsh clinched the tile, becoming the youngest RFC champion in the 11-year history of the event. 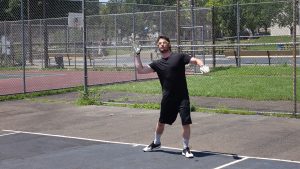 Thank you to the WPH for being an 11-year supporter of the WPH’s RFC, tournament namesake Rodney Fink, and to WPH Pittsburgh Ladder stars “Big Game” Kirk Rys and “Trash Talking” Mattieu Pelletier for bringing chairs, tents, and lunch to the RFC 1-Wall. “The RFC is a team effort,” stated Pelletier, who hosted all of the RFC participants from Ireland and Canada. “I love this event!” 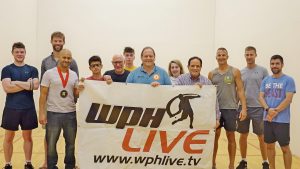 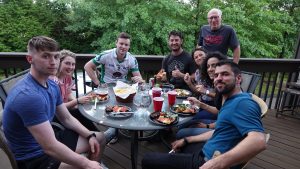 The RFC 11 pro singles title and the R48 Pre Qualifier direct entry and travel stipend to the Atlanta R48 IX Stop #1 was on the line on an action-packed Saturday in Pittsburgh, as all of the 16 pro singles participants played between three to five matches.

Top-seeded David Fink met current USHA 19-and-under and A Singles national champion David Walsh in the upper bracket semifinals, as Walsh was seeking to qualify on the Race 4 Eight tour for the first time. The current R48 #5 was too strong for his 20-year old opponent, cruising in two games. 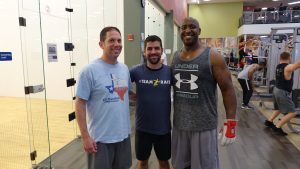 Cleveland’s Joe Frankenfield earned the biggest win of his career in the bottom bracket quarterfinals, upsetting former top 25 R48 pro Ryan Bowler to setup a showdown with the R48’s rising star Niall O’Connor. O’Connor blitzed Cleveland Joe in game one and fought off a second-game rally to advance to the final.

In the first meeting between the top two ranked lefties on the R48 tour, O’Connor surged to an 8-3 first game lead with four deep court kills and two ace serves. Trailing 5-10, Fink rallied, quickly tying the game at 10 and continuing to score points with fly kills and corner kills, ultimately taking the first game 15-10. 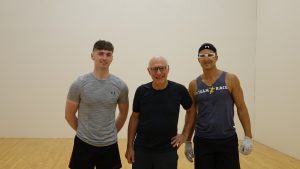 Fink continued his scoring streak in game two, making it 16 consecutive points to take a 6-0 lead. O’Connor continued to push, making a diving re kill to earn a side out at 8-1 and closing the Fink lead to two at 6-8 after three consecutive Fink errors. Fink regrouped, scoring seven of the final eight points of the match to win his fifth RFC.

“We had a great crowd and it was a lot of fun to be able to play Niall for the first time,” stated Fink. “Look for Niall to climb into the top 12 minimum next season.” 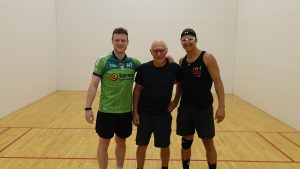 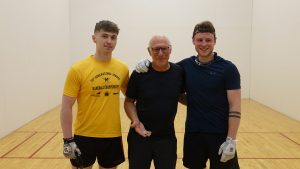 O’Connor and Walsh met ten minutes after the singles final to determine the winner of the Atlanta R48 IX direct entry and travel stipend in a one game to 25 match. An exhausted O’Connor built a 10-9 lead in the first half, but saw that lead evaporate quickly, as Walsh took advantage of O’Connor’s shaky legs, taking a 15-11 lead into the half.

O’Connor found his second wind to start the second half, pulling to within one at 15-16 and taking a seemingly commanding lead at 21-18. Walsh was determined to qualify for the first time and applied the pressure, tying the match at 23 with an “Irish-whip” kill. Walsh served for the match at 24-23, but a blistering O’Connor two-wall pass earned the former Irish junior #1 the side out. A crack ace on the right side wall tied the score at 24, and two long rallies went the way of O’Connor, who qualified for the second time and earned the RFC windfall (prize money, $500 travel stipend, + direct entry into Atlanta.)

“I had plenty motivating me, that’s for sure,” stated a completely spent O’Connor. 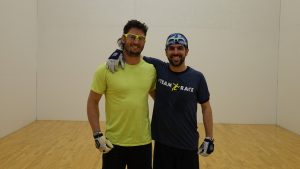 A and B Singles

Cleveland’s Carlos Vazquez bounced back from a quarterfinal loss against O’Connor to win the A, defeating Pittsburgh’s Andrew Joseph and Canada’s Raphael Santerre.

Pittsburgh “Big Game” Kirk Rys lived up to his name in the B singles, defeating WR48 #4 Fiona Tully in the semifinals and rallying from one-game down in the final against Tex Bussey to win the title.

All of the RFC players and fans were treated to a special Saturday night party on Mt. Washington, featuring some of the most spectacular views in the country.

Huge thanks to WPH mega donor and WPH RFC namesake Rodney Fink for serving as the RFC’s main sponsor, Matthieu and Nadia Pelletier for hosting six Irish and Canadian stars, and Mike Semplice, Mark Abranovic, and Chuck Lucci for the incredibly generous donations to the 2019 WPH RFC 11. 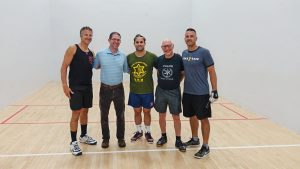 The World Players of Handball kicked off the 13-event 2019/20 R48 IX season with longest running WPH event, the WPH’s Rodney Fink Classic 11 on Thursday.  Following the RFC’s traditional opening ceremonies, two of Pittsburgh’s best faced off in the round of 16, as RFC co-host Mike Semplice defeated “Smokin” Joe Delsardo in two exciting games, 15-8, 15-11. Participating in his record-tying eleventh consecutive RFC (tied with Bowler), Semplice’s right hand kill and left-handed dump kills were too much for the former collegiate football star. “I’m just happy to be able to compete and it’s always great to be a part of the RFC,” stated Semplice. 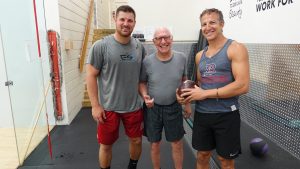 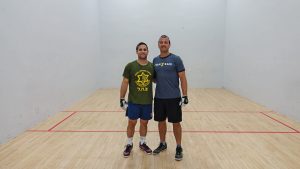 No tournament matches are scheduled for Friday, as all of the players will make final preparations for the huge weekend of handball that will see a travel stipend, direct entry to Atlanta’s R48 IX Stop #1 (October 4, 2019), and prize money awarded to the winner. Players will compete for more prize money in Sunday’s 1-Wall small ball singles. 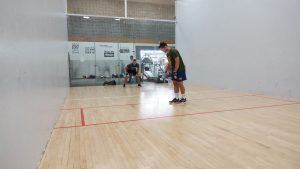 Stay tuned to this thread for updates from the first event of the 2019/20 R48 IX season!