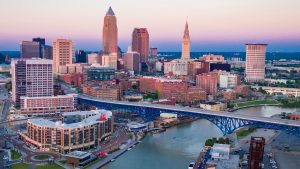 Holy Toledo’s Stevens dominated game one of the final, only to drop game two against the surging 6’6 southpaw Frankenfield. Stevens relied on his methodical attack in the tiebreaker, lob serving to towering lefty’s right and taking advantage of his offensive opportunities to take control of the final frame, ultimately pulling away to clinch the title.

“The tournament went well,” stated tournament director Frankenfield. “We had a nice turnout and good competition. I played pretty well (in the final) but Tyler was tough. I’ll be in Montana (Red Death R48 IX) this January, so hopefully I’ll be able to step it up then.”

“The final was a great match,” stated Rick Stevens. “Joey did a wonderful job putting the tournament together. Thanks Joey.” 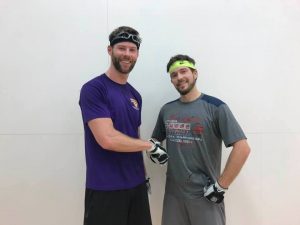 Thank you to 2019 Cleveland Open tournament directors and Midwest handball ambassadors Joe Frankenfield and Mario Dolciato for hosting a great event in the Rock and Roll Capital of the World. Thank you to Team Cleveland Handball founder and videographer Art Haffner for the great coverage from Cleveland.