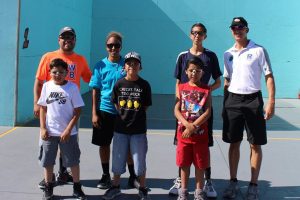 Junior WPH Clinic at the Vegas Lte: WPH Coaches David Fink, Shorty Ruiz, and Tanisha Groomes hosted a clinic for juniors on hand at the Vegas Lte, with Ruiz and Groomes explaining the art of the right corner kill and the “out the door” serve to the left. The inspired juniors aimed for targets, as each applied his new skills. The juniors then played points against the pros, with the end of the clinic featuring a “King of the Court” tournament. Following the clinic, the juniors played in the Junior WPH Vegas Lte Showdown, with 17-and-under and 12-and-under singles divisions and a doubles exhibition 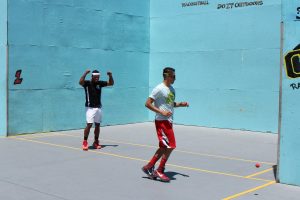 Timbo Gonzalez picks up his first 3-Wall singles title and slams: Timbo Gonzalez arrived in Las Vegas with not only a boisterous New York City entourage, but also a steely determination to claim his first WPH Outdoor 3-Wall singles title. From before the event started, Gonzalez’s handlers were all but guaranteeing a victory and the cross over superstar proved them to be right with his sensational victory against WPH Outdoor #1 Juan Santos. Gonzalez faced match point twice against Gonzalez in the tiebreaker but would not relent, scoring the final four points of the match to win his second WPH Outdoor singles title of the season. Gonzalez is striving to become the only player to be simultaneously ranked #1 in two handball codes (1-Wall Big Ball and WPH Outdoor). Gonzalez completed an outstanding weekend by winning the doubles with partner Shorty Ruiz, defeating Juan Santos and Kevin Gonzalez. 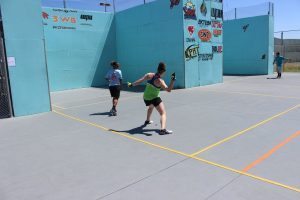 Ciana Ni Churraoin wins her first yellow jersey: CNC announced herself as a bona fide star in the sport with her exceptional performance in defeating WPH Outdoor #1 Tanisha Groomes at the Vegas Lte. CNC and Groomes played one of the best matches in the history of the WPH Outdoor Women’s tour, as the stars traded unbelievable shots throughout the three-game thriller. CNC’s two-handed power, dexterity, balance, ball control and poise under pressure proved that that 20-year old Irishwoman will be a star for decades to come in handball. 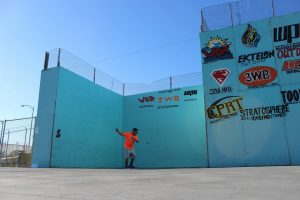 Shorty Ruiz shines in Las Vegas: Shorty Ruiz played sensational handball in his doubles victory with Timbo Gonzalez, but perhaps more importantly, served as a role model, coach and volunteer throughout the weekend in Las Vegas. Ruiz coached junior clinics, refereed multiple matches, encouraged players, and helped the staff in cleaning up the facility throughout the weekend. Thank you Shorty! 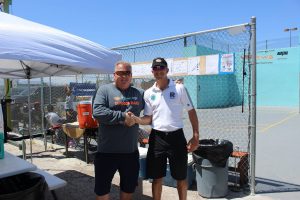 Mike Coulter and the WPH Staff: Tournament host Mike Coulter donated his time and money throughout the weekend to make sure players and fans were treated to a first-class event. Mike has been a tremendous supporter of the WPH since the first 3WallBall Outdoor World Championships in 2010 and continues to be. Thank you! Thank you to Tom and Javi Flores and Dave Vincent and David Fink for organizing the event, keeping the schedule organized, the constant updates, pictures and articles and for bringing the Vegas Lte to life.

Sal Duenas Rallies from five match points down to advance to the semifinals: Trailing Javi Flores 10-12, 6-11 and needing a victory to stay in the WPH Outdoor Top 10, Sal “The Wiz” Duenas faced four match points in his first WPH Outdoor event as a father and 27th event overall. Needing a strong finish to climb back into the WPH Outdoor “Elite 8,” Duenas fought off the four match points, scoring 18 straight points to turn the seemingly insurmountable deficit into a commanding lead. Duenas would defeat Flores and Lobo Valencia in the next round to advance to the semifinals.

Chava Cordova vs. Gman Velazquez: Early 20’s star Chava Cordova faced mid 30’s veteran Gman Velazquez in a spectacular quarterfinal shootout. The pair traded lopsided games to setup a tiebreaker. The tiebreaker was anything but lopsided, as both players made outrageous shots and multiple dives to keep rallies alive. Cordova served for the match twice at 11-9 and three more times at 11-10 before finally securing the dramatic victory. 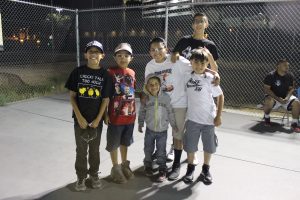 Junior stars shine at the Lte: Following the JR WPH Clinic, the juniors could not be kept off the courts. The juniors were so excited to play that they played points during every timeout and game-breaks of the WPH Outdoor men’s and women’s matches while awaiting their turn to play matches. “My eight-year old son started to show interest in handball this year, but after the clinic he just cannot wait to play,” beamed Manuel Yep, Sr. “He woke up the day after the clinic begging to play handball!”

Read the Saturday recap from the 2016 Vegas Lte here

Read the Sunday recap from the 2016 Vegas Lte here