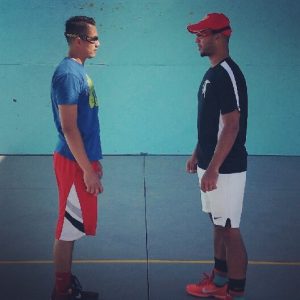 Sunday’s men’s singles final saw WPH Outdoor #1 Juan Santos was seeking his third WPH Outdoor title of the season, while maintaining his undefeated record on the Stratosphere courts since 2013. Santos faced frequent rival and cross over star Timbo Gonzalez, with Gonzalez was aiming to win his first WPH Outdoor singles title on a 3-wall court.

Gonzalez started the match with disciplined aggression, scoring five points before Santos served. Gonzalez ran away with game one, never allowing Santos into a rhythm and handing Santos a seemingly unthinkable 12-3 loss. Santos regrouped in game two, finding his masterful touch and controlling the rallies from the center of the court. Gonzalez’s disciplined aggression turned to chaotic indecision, as Santos evened the match at one game apiece.

The tiebreaker would produce the best drama of the WPH Outdoor V season, as both stars were in full flight throughout the decider. Gonzalez and Santos traded the lead five times, with the pair arriving at a 9-all tie. On the eleventh shot of the 9-all rally, Santos his a drive to the left sideline. Rather than taking the ball off the wall, Gonzalez let the ball drop and immediately called the ball out. With the linesman unable to agree, the point was deemed a replay by the referee. The next controversy would be even more critical, with Santos serving at 10-9. Santos and Gonzalez traded drives in the front court, with Santos going for the kill and Gonzalez diving in for a re kill. Gonzalez’s re kill hit the left side wall first, which is where the controversy started. The referee was unable to see the left corner with both players obstructing his view, and the linesman were split as to whether Gonzalez’s re kill hit the floor or the front wall first. After a nearly 10-minute discussion, the referee called for a second replay on a questionable call in three rallies, negating what would have been match point for Santos. Santos arrived at 11-9 on the next point and served to win the title. Santos’ serve was too conservative and Gonzalez pounced with a right-hand overhand drive and won the rally with a kill on his next shot. Two uncharacteristic errors from Santos tied the score at 11 and Gonzalez rode the momentum to two more points to claim his first 3-Wall singles title and second WPH Outdoor title of the season. “It just feels great to win this,” stated Gonzalez. “It was really hot today and I just had to manage my adrenaline and go for my shots.” 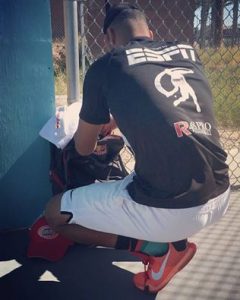 Top-seeded Juan Santos and Kevin Gonzalez started slowly in their semifinal clash with Noe Garcia and Chava Cordova, dropping game one before rallying to win in three games. Team Gonzalez/Ruiz scored 18 of the first 20 points in their semifinal doubles match against Gman Velazquez and Lobo Valencia before a mid-second game collapse led to a third game. Team Gonzalez/Ruiz demonstrated maturity and poise in picking one another up, rallying to overcome their collapse to win the tiebreaker.

WPH Outdoor Women’s #1 Tanisha Groomes met WR48 cross over star Ciana Ni Churraoin for the second time in less than a year on the WPH Outdoor Women’s tour. Groomes won the first encounter in a tiebreaker in Venice Beach last summer in CNC’s second 3-Wall match of her career.

Groomes played some of the best handball of her career in the final, taking advantage of nearly every opening to hold off CNC in game one. Ni Churraoin took her game to another level in game two, whipping an overhand serve with her right hand out-the-door to the left and pouncing on nearly every return with right or left hand kills to force a tiebreaker. Ni Churraoin continued to dazzle in the third frame, demonstrating remarkable balance, agility, power and ball control to build a 9-5 lead. Groomes had held off seven match points and a number of close calls in her dominant WPH Outdoor career and it appeared she might pull another rabbit out of her hat against CNC. Ni Churraoin led 11-7, but a side out and a quick point seemed to be the slight opening that Groomes needed. CNC would not allow Groomes back into the match, slamming the door on her first WPH title with a perfect serve and skill on her second serve at match point. “I’ve lost a lot of matches when I’ve had game point and I didn’t want that to happen today,” stated an ecstatic Ni Churraoin. “I can’t wait to get my first yellow jersey!”

Tanisha Groomes teamed with her Southern California rival and friend Ashley Moler in the women’s doubles, while Ciana Ni Churraoin teamed with her Irish traveling partner Kate Moran. Team Irish led 8-3 in game one and seemed to be in control, but Team USA stormed back to score the final nine points of the game to take a one-game lead. Team Irish would threaten again in game two but also come up short, as Team USA won two close games to win the title.

Thank you to 3WallBall tournament host Mike Coulter for his hospitality and for providing the WPH to hold the Vegas Lte on his courts at the Stratosphere. Thank you to Tom and Javi Flores and David Fink for working 20-hour tournament days, Dave Vincent for the updates, Shorty Ruiz and Tanisha Groomes for helping to coach the JR WPH Clinic