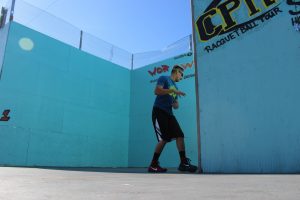 Pleasant mid-May temperatures greeted the men’s, women’s and junior WPH Outdoor stars on Saturday in Las Vegas, as the top players in the sport kicked off the WPH Outdoor V Stop #5 Vegas Lte at the Stratosphere Hotel and Casino.

Top-seeded Juan Santos cruised to the final for the second consecutive year at the Vegas Lte, proving why he is the WPH Outdoor #1 and undefeated on the Vegas courts since 2013. Santos made the game look astonishingly easy in dismantling Carlos Marin, Edgar Vizcaino and Sal Duenas en route to Sunday’s final. “In my 20 years of playing and watching big ball handball, I’ve never seen a player like Santos,” stated WPH Outdoor Director Tom Flores.

WPH Outdoor #2 and second-seeded Timbo Gonzalez also encountered little difficult on Saturday, steamrolling through the bottom half of the draw. Gonzalez was impressive in defeating Shorty Ruiz and Chava Cordova in straight sets to advance to his second Vegas Lte final. “I can’t see Timbo not winning this one with the way he is playing,” stated Gonzalez’s entourage member Dito.

Despite the ease with which Santos and Gonzalez advanced to the final, round of 16 and quarterfinal matches produced thrilling drama, including Sal Duenas battling back from an 10-12, 6-11 (four match point) deficit to score 18 straight points to overcome Javi Flores in the round of 16 and Chava Cordova outlasting Gman Velazquez in an incredible tiebreaker to advance to the semifinals. More on those exciting matches in DF’s Top Moments From the Lte following Sunday’s action. 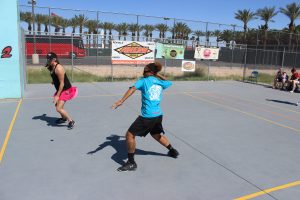 WPH Coaches David Fink, Shorty Ruiz, and Tanisha Groomes hosted a clinic for several juniors on hand at the Vegas Lte, with Ruiz and Groomes explaining the art of the right corner kill and the “out the door” serve to the left. The inspired juniors aimed for targets, as each applied his new skills. The juniors then played points against the pros, with the end of the clinic featuring a “King of the Court” tournament. Following the clinic, the juniors kicked off the Junior WPH Vegas Lte Showdown, with 17-and-under and 12-and-under divisions. The junior event concludes tomorrow with each of the juniors relishing the opportunity to play under the Stratosphere Tower. 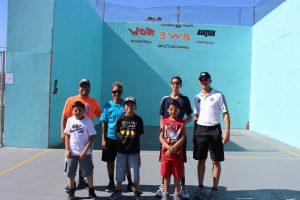 Stay tuned onto wphlive.tv, Like the World Players of Handball on Facebook, or follow the WPH on Twitter @dfwph and @wphlive for Sunday’s finals results from the Vegas Lte! The World Players of Handball is a non-profit foundation aiming to grow the game of handball through innovation and inspiring the next generation of players through junior clinics with certified WPH coaches, junior tournaments and the Race 4 Eight tour.