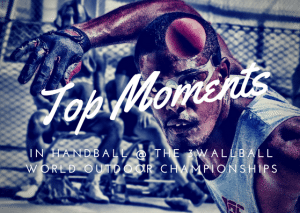 JR WPH Shines in Vegas: JR WPH held two junior handball clinics at the 2016 3WallBall Outdoor World Championships for more than 80 juniors between the ages of 9-18, while also hosting the JR WPH 3WallBall junior singles tournament and sponsoring several dozen juniors to participate in the event. The multiple junior handball clinics during the week focused on handball stroke instruction and exciting games to reinforce the lessons. The weekend ended with a sensational JR WPH singles tournament for juniors between the ages of 9-19. Read more about the JR WPH clinics and tournament here>

1-Wall Small Ball Singles Semifinals and Finals Decided by a Combined 7 Points: The 1-Wall Small Ball singles produced three of the most exciting matches of the event, as the two semifinal and final matches were decided by just seven combined points. Pee Wee Castro rallied to defeat Robert Lee in the upper bracket semifinal, 21-18, while Gio Vasquez rallied to defeat David Fink 21-19 in the bottom bracket semifinal. Vasquez would need to rally again in the final, this time against Castro to claim the title, 21-19.

Jenny Qu Arrives: The Jenny Qu buzz started building during her practice sessions three days before the Women’s 1-Wall Big Ball started. Qu hit the ball unlike most had ever seen, but could she do it when it mattered? YES! Qu dominated world 1-Wall champions Danielle Daskalakis and Sandy Ng in the semifinals and finals of the Women’s 1-Wall Big Ball singles, capturing the 3WallBall 1-Wall Big Ball title in her first tournament outside of New York City and announcing herself as an instant phenom in the sport.

Boxer is Back: After winning the Men’s 3-Wall Big Ball Men’s Pro Singles and Doubles in 2011, Boxer Rosales had been relatively quiet. A move to Idaho just more than two years ago removed him from the Southern California Big Ball scene and steered him into Small Ball 4-Wall. Boxer entered the 2016 3WallBall Championships unseeded in a deep 46-man draw but showed that his game can still beat the best, advancing to the final with sensational victories against Conall McCavitt, Adrian Conteras, Alfredo Morales, Edgar Vizcaino, and Jose Villegas before falling to Juan Santos in the final.

Sandy Does it Again: Sandy Ng continued her streak of winning a pro title in every edition of the 3WallBall Outdoor World Championships, winning the Women’s 1-Wall Big Ball Doubles and the 3-Wall Big Ball Doubles. Ng is the only player in the history of the 3WallBall Outdoor World Championships to have won a pro title in all seven editions of the event. Wow!

Timbo Slams the 1-Wall Big Ball: Timbo Gonzalez was untouchable in the 1-Wall Big Ball singles and doubles, at one point outscoring his semifinal singles and doubles opponents and his singles finals opponent by a combined 75-15. Gonzalez would be pushed alongside partner Sam Sanford in the doubles final but prevail in a sensational match against Carlos Pena and Hector Velez. “There is ice cold and then there is a level beyond that and that’s where Timbo is,” stated WPH ESPN3 announcer Brian Pineda.

Juan Santos Sweeps the 3-Wall Big Ball: In 11 combined 3-Wall Big Ball Singles, Doubles, and Mixed Doubles matches, Santos did not drop one game in a shockingly effortless dismantling of the best 3-Wall Big Ball players in the world. Santos entered the event admitting to some rust from not having had time to train, but that rust was never evident in his ruination of each of his opponents. Santos is just 22 years old and whispers of “greatest ever” have already started.

335 Handball Entries: Handball achieved its highest number of entries in 2016, with a whopping 335 players from across the U.S., Ireland, Spain, and Australia competing in the 3WallBall Championships. With many players entering between 2-4 divisions, each player was able to not only enjoy Las Vegas, but also playing various versions of their favorite sport. We hope to see everyone next year!