JR WPH held two junior handball clinics at the 2016 3WallBall Outdoor World Championships for more than 80 juniors between the ages of 9-18, while also hosting the JR WPH 3WallBall junior singles tournament and sponsoring several dozen juniors to participate in the event. The multiple junior handball clinics during the week focused on handball stroke instruction and exciting games to reinforce the lessons. The weekend ended with a sensational JR WPH singles tournament for juniors between the ages of 9-19. Read about the clinics and tournament below! 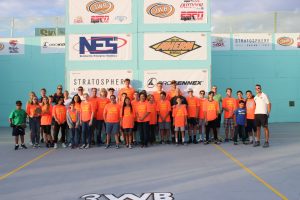 The opening night of the 2016 WPH 3WallBall Outdoor World Championships featured junior handball clinics for more than 50 Las Vegas high school students. JR WPH Coaches taught handball skills to the enthusiastic youngsters, focusing on the rules and proper techniques to play handball, while also having a lot of fun on the court, After learning the serve and hitting the ball off the bounce, the youngsters teamed up with one another and the pros to play King of the Court doubles, with the teams producing some incredible rallies.

“We love to see kids on the court enjoying themselves and learning to be physically active through handball,” stated WPH Development Director David Fink. “The Wednesday night junior handball clinics at the 3WallBall Outdoor World Championships have become a tradition and it’s one of the highlights of the event.” 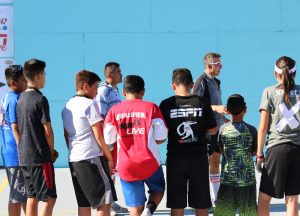 JR WPH was proud to present an exciting junior handball clinic for more 16 youngsters competing in the 2016 3WallBall Outdoor Championships. WPH Coaches David Fink, Herman Mendez, and Lowveens Jacques led the juniors through serve and kill shot instruction, followed by alternating doubles points with the pros and an around-the-world rally game. The coaches stressed the importance of having fun, setting goals to improve, and the fundamentals of the game. “I am always happy to help with the kids and share some of the knowledge I’ve gained in my years playing handball,” stated Coach Mendez. Thank you to WPH Coaches Mendez and Jacques. 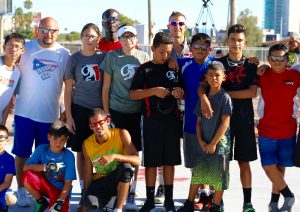 The juniors took the tournament stage on Sunday morning, with 27 youngsters battling one another next to their WPH Outdoor heroes. The juniors demonstrated outstanding skills and sportsmanship throughout the morning and afternoon, with many of the matches decided by three points or less. 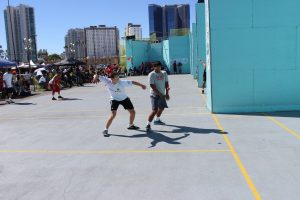