Detroit, MI, WPH Press, 9/26/18- Detroit’s historic Palmer Park Courts were home to the USHA Three Wall Nationals for two decades and are now being restored to their former glory by a group of passionate Detroit handball players, with the aim of hosting junior handball clinics and programs at the historic venue, as well as open play for Motor City 3-Wall enthusiasts. 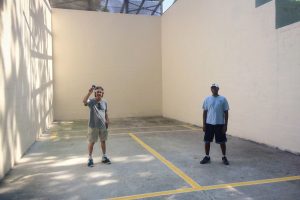 The Detroit handball community will setup a booth to introduce the game to new players on September 29, followed by a junior handball clinic on October 6, all part of the Detroit outdoor handball rejuvenation.

“All the greats of the 1950’s and 1960’s played at Palmer Park,” stated Palmer Park Courts head restorer Stewart Shevin. “Detroit is having a comeback of sorts, so this summer, I spearheaded a group of people to refurbish this forgotten jewel in our city and we have come far along in restoring the famed courts. By tuck-pointing and painting the walls, resurfacing the floors, and much more, the courts have been brought back to life, with people having played there a number of times already.”