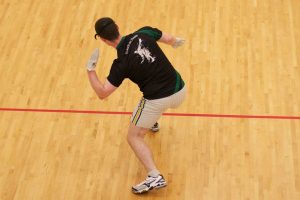 Daniel Cordova vs vs. Diarmaid Nash at the 2018 World Championships

Danos and Diarmaid had already met twice in 2018, with Diarmaid defeating Danos in two games at the 2018 R48 Red Death in Missoula and Danos exacting revenge at the 2018 Aces Player’s Championship, defeating “D” in three games. Diarmaid’s third trip to the U.S. in 2018 produced the third meeting in eight months between the stylish lefty and the dynamic hop artist and would determine the 2018 winner of this rivalry and a spot in the World Championship quarterfinals.

Daniel Cordova and Diarmaid Nash staged a classic match in the round of 16 at the 2018 World Handball Championships, with the pair trading blows for nearly two hours. How did two of the world’s best meet in the round of 16 in the World Championships? We’re not really sure but we are sure that this one provided more fireworks than a pre-COVID July 4th and ran nearly as long as the Boston marathon.

Nash won game one convincingly, 21-10 and after just under 70 minutes appeared to be in position for a routine two-game sweep on the two-glass exhibition court at the University of Minnesota. Nash needed just three more points at 18-18 in game two to secure the victory and hop into the ice bath before a meeting with his countryman Killian Carroll. Danos had other ideas, reeling off three consecutive points to force a third, making this one of the most grueling matches at the 2018 World Championships.

Who provided more fireworks while still having the legs to cross the finish line? We pick up the action at the start of the tiebreaker at 4:18:00 (of course you can scroll back to 3:05:00 watch the match in its entirety).

Watch Danos vs. Diarmaid tiebreaker starting at the 4:18:00 mark HERE