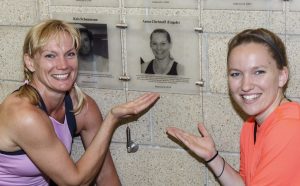 A WPH Patreon Exclusive at patreon.om/wphlive

WPH Patreon was thrilled to present Anna Christoff: The Intensity and Drive To Be The Best, featuring one of the greatest women’s handball players to ever wear gloves in a special week-long series on Patreon.com.

Christoff won more than 50 national championships and multiple world championships, making her one of the game’s most decorated champions and the inspiration for the next generation of women’s superstars.

If you are not a pledge supporter of Patreon w/the WPH, then you need to sign up now.  The WPH will make a unique and exclusive post each day during the Pandemic–Now that is a lot of content!!

Who was your coach and greatest influence? What were the most important lessons you learned?

In my teens and early twenties, Tim Labey and Jaime Paredes. They both had great strokes, fundamentals and footwork, though they had different strengths. They spent countless hours in the court with me helping me develop these same skills. Later in my career, Lea Ann Martin! She supported me on and off the court, offering many training suggestions. She also helped me grow both as a player and a person, and helped me stay grounded.

What did you do to prepare for tournaments?

In my prime cross training was my top priority.  I would do anything and everything to improve my tournament play. Sprints, jumping rope, footwork drills on the court, road biking, running 3-5 miles max, high rep lifting, and practice, practice, practice. My training would change throughout the year depending on how many events I was playing in. As I neared 40 I did less running and sprinting, and incorporated yoga.

“She’s always training,” stated Anna’s then 14-year old daughter Alekzandra to sideline reporter to sideline reporter Kara Mack during her mom’s 2007 Simple Green U.S. Open victory against Jenny Schmitt. “She’s likes to get inside her own head, she doesn’t like to talk to people and get distracted (when she’s training). She doesn’t like to talk about handball a lot at home but she’s always at the club practicing and lifting weights, especially before a tournament.”

Were you able to play competently fairly quickly or did it take some time to start to be able to hit the ball and rally?

I’d say, yes, I could hit the ball pretty well right away. I’d already played softball and volleyball for a couple years, both sports take a lot of eye hand coordination and require quick reaction time which helped.

Could you discuss winning your first USHA national 4-Wall title?

I won my first Open 4-wall titles in 1989 at 21 years old at the Charlie Club in Chicago. That year was a unique situation with Women’s Open events using both balls, re: Hard Ball and Soft Ball singles and doubles.  We were allowed to enter three events. I was one of the only women to. . . . . Read the rest and so much more, HERE>