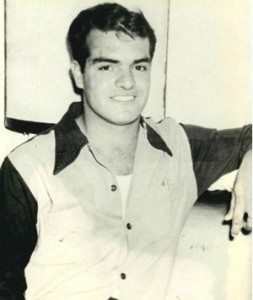 Tucson lost one of its greatest handball ambassadors and personalities, Al Cuevas, on February 27, 2015. A longtime supporter of the USHA, WPH and Tucson youth handball, Mr. Cuevas was known as one of the friendliest, most witty and compassionate members of the Tucson handball community.

Mr. Cuevas was born in 1927 in Gary, Indiana, and served in the military during WWII, Korea and Vietnam, earning the prestigious Air Medal for his service in Vietnam. Mr. Cuevas was an accomplished musician and athlete, ultimately dedicating his passion for sports towards handball. Mr. Cuevas became one of the most respected and highly regarded members of the Tucson handball community, beloved by players of all ages. “Al was super friendly and had a super sense of humor,” revealed 6-time national 4-Wall singles champion and friend Fred Lewis. “Al had a tiebreaker named after him; if you lost the first two games and won the third, you were not the match winner but you had to buy the beers.”

“One of my favorite Al Cuevas memories was his win over former top player Dave Lynch,” recalled multiple-time national champion Charlie Wicker. “Dave told Al he would give him 20 points and the serve. Al said ok and went into the court and served a crack. Dave begged for another game and Al said no way!”

Mr. Cuevas is survived by his children, Alice Furgason (Tom Furgason), Mary Cuevas, Andrea Dinapoli (Jeff Dinapoli), and Bill Cuevas, as well as his grandson, Dashiell Cuevas. Mr. Cuevas will be remembered fondly by all of those who knew him in the Tucson handball community and beyond. by David Fink

Obituary for Albert Cuevas
Albert passed peacefully on February 27th, 2015, in his home in Tucson, Arizona surrounded by family. Born on April 24th, 1927 in Gary, Indiana he became a veteran of three wars: WWII, Korea and Vietnam. Albert witnessed the Nuremberg Trials and received numerous awards for his service in the United States Army/Air Force including the Air Medal during his service in Vietnam. He was a wise, generous, and compassionate man who lived his life with integrity. While serving in Vietnam he had his wife, Nettie, prepare and send care packages that he passed on to orphaned Vietnamese children, writing letters to her expressing his desire to bring the children home to a better life in the United States. Albert was a talented musician, loved to sing and play guitar/keyboards/harmonica, as well as an accomplished athlete, contributing to Tucson’s rich handball culture. Albert’s charisma and wry sense of humor was felt by all when he entered a room. Beloved father, he is survived by children Alice Furgason (Tom Furgason), Mary Cuevas, Andrea Dinapoli (Jeff Dinapoli), and Bill Cuevas as well as grandson Dashiell Cuevas. He will be greatly missed. A celebration of his life will be held at the Villa Hermosa, March 15, 2015 from 1-3pm, 6300 E. Speedway, upstairs in the Belle Star Salon, overflow parking available in Doctor Office parking lot east of Villa Hermosa.

The Tucson Memorial Handball Open was designed to honor and celebrate friends and family of the sport, that have passed, with hopes of highlighting their life achievements, archiving their legacies, and sharing their stories.  If you have stories or commentary about Al Cuevas, or others close to you, please contact us and we will post.

Please visit R2sports.com for the online entry application, search for the November WPH Tucson Memorial and help us share the amazing stories from your fallen handball community members.

Send your personalized memorial, to be published on this page to: Info@wphlive.tv