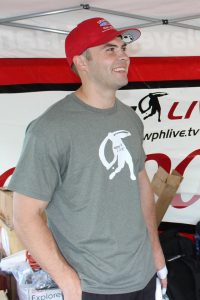 The Sports Mall, home to the May 17-19 WPH Aces Player’s Championship, was again the venue for this year’s Utah State Singles Handball Tournament. The much anticipated event drew a very encouraging number of players, with lots of up and coming talent focused on dethroning some of the old guard, but………….not so fast. 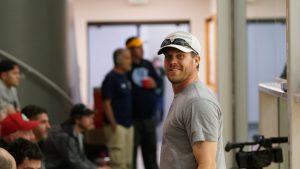 In the semis, Price defeated Bell in two, while Karner overcame Roberts to setup a rematch of last year’s final. In the final, Price got hot early and cruised to a first game win. Game two saw Karner with the hot hand early, building a 13-7 lead, only to see Price work his was back to 16-all before catching another hot streak of his own to take the game and match, 21-17.

The A bracket was very competitive with each match very close. In the semis, AJ Allan took down Gus Hart, while John Wainright got past Pocatello’s Rick Lopez. The final saw the more experienced Wainright holding off the young up-and-coming Allan 17,17.

The B Semis featured Jon Larson defeating Taylor Scott (15,9), while Grand Junction’s Trevor Bachman edged Andre Lopez in a breaker. Bachman graduated from the B’s, defeating Larson in the final (15,11).

The 60+ singles featured in a larger than expected draw, which was split into an A and B dropdown. The A semis had the Sports Mall buzzing, as Greg Bassett defeated local legend Scott Beebe in two straight. In the other semifinal, Dan Price downed Steve Bell in two.

In the final, Price took game one against Bassett, 21-12. In game two, however, Basset seized an 18-6 lead, appearing to be moments from pushing the final to a tiebreaker. Somehow, Judge Price was able summon another gear, scoring 14 of the next 16 points to tie the game at 20, benefitting from several self-hinder calls from Bassett, and eventually taking game and match, 21-20. True sportsmanship was on display in this match and throughout the tournament.

See everyone at the WPH Aces Player’s Championship in May!