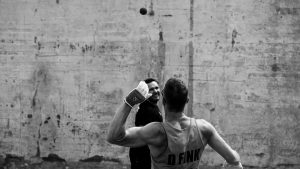 Handball on the Rock

San Francisco, CA, WPH Press, 4/3/19- WPH Race 4 Eight pros traveled to Alcatraz Island on the last weekend in March, playing the first handball matches on “The Rock” since the federal penitentiary closed in 1963. 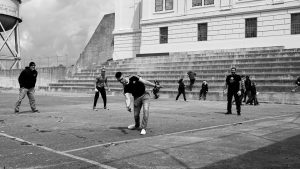 David Fink teamed with fellow SR48 star Pete Papathemetrios to face Marcos Chavez and John Vargas in the first handball match at Alcatraz since 1963. The foursome battled 40 mile per hour winds, dazzling more than 1,000 Alcatraz tourists in a three-game thriller, ultimately won by Fink/Papa. “That’s definitely the most fun I’ve had playing handball,” barked Fink. “I think the Alcatraz tourists thought we were part of the tour, playing a reenactment of “rec” time. What an experience!”

Canadian Race 4 Eight stars Ryan Bowler and Ivan Burgos traveled to “The Rock” two days after the 1-Wall Doubles showdown at Alcatraz. Bowler used his paddle shots to perfection on Alcatraz’s #5 court, ousting R48 next generation star Ivan Burgos 25-8 for the Canadian Alcatraz title. “It was a very fun day on the island and an experience I’ll never forget,” smiled Bowler.

For more information on the history of Alcatraz, go HERE

1-Wall Big Ball Doubles video HERE (this video has no sound, as it was used as B-Roll on ESPN; while announcers spoke over the play)