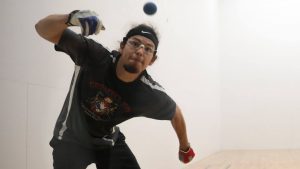 The handball-crazed South End Rowing Club was thrilled to have a chance to learn from and watch the Juarez legend, as Lucho provided in depth tutorials on improving handball skills for all levels of players.

“The clinic was really great,” declared Lucho. “There were about 15 players, ranging from juniors, women’s players, and masters. We went over the return of serve, off-hand mechanics, and the back wall game.” 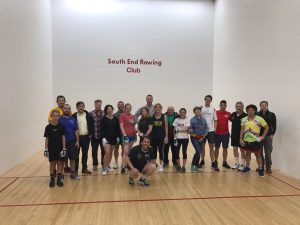 Following the clinics, Lucho took on all comers in doubles on the famed SERC exhibition court. Lucho shared the court with Olympic Club R48 pros Erik Torres and Loren Collado, as well as Bay Area phenom Jesse Ward, Jay Grenfell, and Joe Tierney. Despite playing a grueling two-hour classic with Carroll just three days prior, Lucho still managed to win all of the games.

“It was great to meet Jesse,” stated Lucho. “He’s real quick and gets a lot of balls back.”