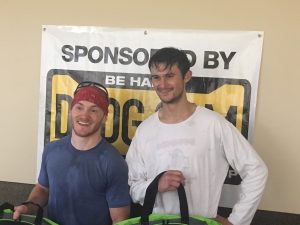 Loren Collado entered The Hof as the top seed and advanced to the final in the upper bracket without dropping a game, including a two-game battle with Big Ball cross over star Salvador Oloscon in the semifinals.

NorCal’s Jesse Ward entered The Hoff as the sixth seed and well off the radar. A clinical victory against WR48 superstar Tracy Davis in the quarterfinals and an impressive two-game sweep against Concord’s Pete Papathemetrios setup a finals clash with Collado. 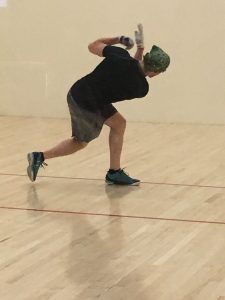 Ward used his blazing speed and conditioning to extend rallies in the final, taking a 14-4 first-game lead before Collado found his groove. “Jesse was all over the court picking up kills and pass shots and hitting nice inside out kills with his right down the right alley,” stated WPH Hof reporter Pete Papathemetrios. “Jesse closed out the first game with good hard serves to the left with reverse.”

Collado bounced back in game two, mixing up his game by utilizing the ceiling and two-wall pass to force a tiebreaker, 21-15. “Loren moved Jesse around the court with good ceiling balls and pass shots until he got Jesse a bit winded and put away the setups,” reported Papa. “Loren’s back wall game was really on in the second game with some 40-foot roll outs.”

The tiebreaker produced an early July 4th fireworks show, as the R48 pro and the rising NorCal sensation had the Hof fans on the edge of their seats throughout the decider. “Loren kept his momentum going from game two and took a 7-1 lead but Jesse kept diving and running and making Loren hit extra shots to win the point,” barked Papa.

Ward would close the Collado lead to 4-8 but Collado retook control, arriving at match point, 10-4. “Jesse did not stop diving or hustling for pass shots and kills, forcing Loren into three and four offensive opportunities,” stated Papa. “Loren barely missed the 11th point a few times.”

Ward closed the gap to 9-10, putting the seemingly insurmountable 10-4 Collado lead in jeopardy. “A couple of hard-fought rallies following a timeout at 9-10 went Jesse’s way, as Jesse took the match with more amazing gets and a few nice kills in the clutch,” stated Papa. 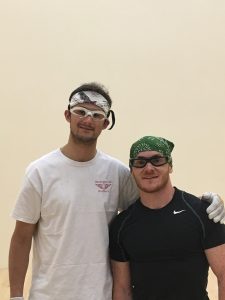 To view the brackets and results from the 2018 Ken Hofmann Memorial, go HERE