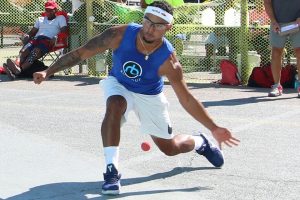 Timbo Gonzalez played steady handball en route to the final, dispatching Carlos Pena and Iggy Accardi to reach his second major singles final of the season. Kadeem Bush was impressive in the bottom bracket, dominating Migz Mendez in the quarterfinals and ousting Tywan Cook in an outstanding match to reach the final.

Gonzalez was in control in the one-game final, never allowing Bush to demonstrate his highlight reel skills. Gonzalez built a 19-4 lead in the one-game to 25 final and held off a late Bush rally to win the title. “I was blowing him out and my shoulder started hurting so he was able to sneak points in,” stated Gonzalez. 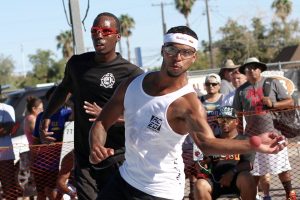 Gonzalez completed the Men’s Slam by teaming with Migz Mendez, defeating Allan Sanchez and Carlos Pena in the final 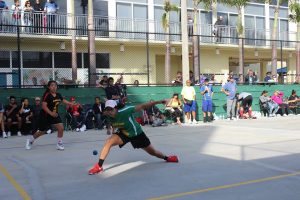 The final was a rematch of the 2018 WPH/Castle Hill Florida Cup, with Daskalakis edging Garate in a thriller.

Garate took control in the one game final on Coney Island’s Courts, building an 18-12 lead, just seven points from the biggest title of her career. “I wasn’t playing great, although Jessenia was playing very well,” stated Daskalakis. “I just felt slow in my steps and Jessenia was taking everything out of the air and being aggressive.”

Daskalakis starting her comeback, eventually tying Garate at 18. “I kind of snapped myself out my poor play with a couple of timeouts and pep talks,” stated Daskalakis. “I started moving my legs and that made a big difference.”

Daskalakis and Garate traded points from 18-all to 20-all before Daskalakis closed the match with five consecutive points, adding another championship to her spectacular resume.

To follow the brackets and results from the 11th annual 2018 USHA WallBall National Championships, go HERE