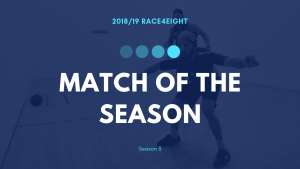 Tucson, AZ, WPH Press, 6/9/19- The 2018/19 Race 4 Eight season produced dozens of sensational matches, with the R48, WR48, and SR48 pros dazzling thousands of fans and broadcast viewers throughout the nine-event, seven-month season. Players, fans, and administrators were asked to vote for their favorite matches of the season and the votes were nearly unanimous. Check out the matches that were named the “Matches of the Year” below! 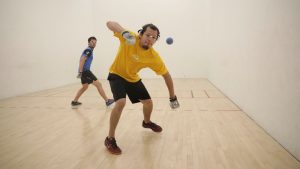 Lucho Cordova opened the 2018/19 Race 4 Eight season by stunning R48 #1 Killian Carroll in two games on his (then) home court in Atlanta in October. Carroll exacted revenge on Cordova in Portland (December), setting the stage for a rubber match at San Francisco’s Olympic Club.

Cordova raced to a 13-1 lead in game one in the San Francisco semifinal, seemingly finding the bottom board with every swing. “That is the best handball I’ve ever played,” Cordova would later say. “I was just going for everything and everything was rolling out.” 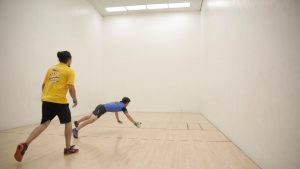 No stranger to huge deficits and extraordinary comebacks, Carroll started his charge. What seemed like an exercise in gaining momentum for game two quickly became a competitive game, as Carroll tallied points quickly. When the dust settled, Carroll had tied and eventually eclipsed Lucho, outscoring the Mexican superstar 14-0 to close out the game.

Most players would have licked their wounds after a first-game collapse, but Lucho had other ideas. Cordova built another lead in game two, only to be caught again. Cordova would ultimately force overtime after fighting off game points, scoring the final six points of the game to force a third game. 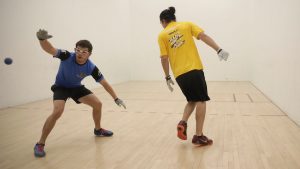 The third game was anticlimactic, as the action and drama from the first two could not be replicated.

“The ups and downs of the first two games will never leave me,” stated ESPN play-by-play announcer Dave Vincent.

“The diving, shot making, and high level of play in this match was incredible to watch,” stated R48 Elite 8 pro David Fink. “It was exhausting just watching, I cannot imagine how weary Killian and Lucho must have been. This was just another chapter in what is quickly becoming one of the best rivalries in the sport between two 20-something superstars.” 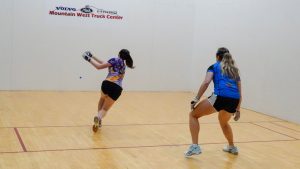 WR48 #1 Catriona Casey met current Women’s World Champion Martina McMahon in the 2019 Aces Player’s Championship WR48 Final in the first WR48 meeting between the top two stars in women’s since 2017, with McMahon defeating Casey in a tiebreaker in the Tucson Memorial final. McMahon had won all of their major finals in 2018, sweeping the GAA All Ireland titles and winning the World Championship, defeating Casey in each final. Casey exacted revenge two months prior to the Aces Player’s Championship, defeating McMahon in a thrilling tiebreaker to win the 2019 All Ireland 40×20 Championship. 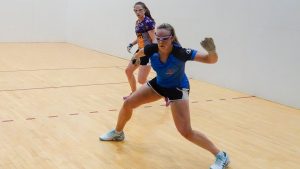 The two titans of the women’s game played sensationally in the WR48 Player’s Championship final, with sublime shot making and electricity and tension that only the greatest rivals can create. Neither star was able to separate herself by more than three points in game one, as McMahon’s power-offense was matched by Casey’s precision and guile. Casey routinely pushed McMahon into the deep court, but even from 38-feet, McMahon was able to find the bottom board with both hands. Casey served for the first game at 14-13 and executed a perfect right-handed dump kill into the right corner to take a one-game lead. “I’ve been practicing that shot and I really needed it at that moment,” Casey would later say. 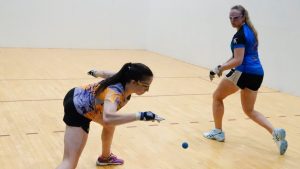 The beginning of the second game mirrored the first, as the unwavering focus and concentration from both women yielded few scoring opportunities. With the game tied at five, Casey switched to a high lob serve that befuddled McMahon, producing three errors in four swings and shattering the world champion’s confidence. McMahon would not regain her confidence and smooth stroke until she trailed 5-12. Despite a furious late-game rally from McMahon, Casey’s resolve carried her across the line, ending the match just as she had the first game, with a perfectly struck right-handed dump kill into the right corner.

“Martina is always such a tough competitor and I’m delighted to have won today,” stated Casey to ESPN’s Kara Mack. 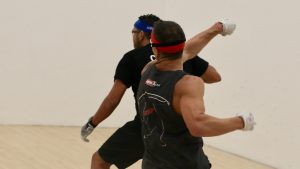 David Fink and Marcos Chavez met for the sixth consecutive SR48 final, dating back to Fink’s first SR48 start in February of 2018 in Las Vegas. Fink and Chavez entered the 2019 Aces Player’s Championship final ranked #1 and #2 on the SR48 tour, respectively, as well as #5 and #7 on the R48 tour, respectively. “We have never seen two SR48 stars currently ranked in the R48 Elite 8 and we’ll probably never see it again,” stated WPH Executive Director Dave Vincent.

Fink had defeated Chavez in four of their first five SR48 finals, with the lone loss coming in the 2018 Aces Player’s Championship final—a one-game match to 25 in which Fink led 22-18. Fink was determined to win his first SR48 Player’s Championship, but Chavez was not about to relinquish his crown. 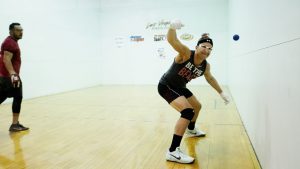 Chavez blitzed Fink to start the match, seizing a 12-1 lead and holding Fink to just three service innings. “I was so sore this morning and wasn’t really sure if I’d even be competitive,” Chavez would later say.

Fink slowly turned the momentum after Chavez’ hot start, cutting the deficit to six at 7-13 and 8-14. “I always felt like I could come back to win the game, even at 1-12,” stated Fink. “Marcos was playing so well to start that there really wasn’t anything I could do.”

Fink fought off six game points to tie the score at 14, four of which saw Chavez miss kill shot attempts by one inch. “I felt like I played my best handball of the tournament when facing those game points,” stated Fink. “I defended his serve well and even though he barely missed those kill shot attempts, they were tough shots I forced him to take.”

Chavez would take a 15-14 lead and earn a seventh opportunity to win the game but could not score the final point, as Fink scored the final three points of the game, the third being a right-hand kill from the short line. 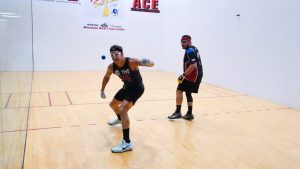 Expect many more incredible matches in the upcoming 2019/20 Race 4 Eight 9 season, with the action starting in just four months!

To view all of the Race 4 Eight pro players bios, go HERE 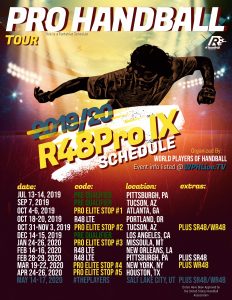 WPH RACE 4 EIGHT: The World Players of Handball’s 2019/20 Patreon.com/WPHLive.com Race 4 Eight 9 will feature Race 4 Eight stops in Georgia, Oregon, Arizona, Montana, Louisiana, Pennsylvania, New York, and Texas, culminating with The Player’s Championship in a TBD location in the May of 2020. Similar to NASCAR’s Nextel Cup and the FedEx PGA Playoffs, players earn points in the Race 4 Eight’s regular season stops to qualify for the season-ending Player’s Championship and bonus prizes.