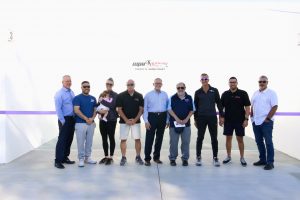 Tucson, AZ, WPH Press, 11/14/19- The WPH and the City of Tucson were thrilled to host the WPH Randolph 3-Wall Park Ribbon Cutting, with more than 100 handball and community supporters in attendance, including the Tucson Mayor, Jonathan Rothschild, many of the WPH Randolph 3-Wall Park “Legacy Donors,” members of the Randolph construction team, and members of the media and Tucson Parks and Recreation Department. 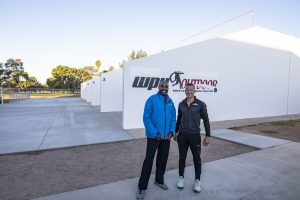 Prior to the ribbon cutting, the WPH appeared on three live segments on Tucson’s Fox Morning Show. “The transformation from the beginning of September when construction started until now how been sensational,” stated WPH Development Director David Fink to KOLD’s Kevin Adger on the live morning program. “We now have unquestionably the best 3-Wall Park in the world.” 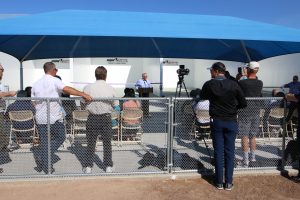 WPH Randolph 3-Wall Park co-project engineer Benny Young emceed the event and spoke first at one of the most potentially impactful initiatives in Tucson handball lore since Carl Porter helped engineer a “saving handball” campaign some years back. “This project was truly a team effort. This has been a project we’ve been thinking about doing for 17 years and because of the help of our mayor and the incredible community, we got it done and it’s just beautiful.” 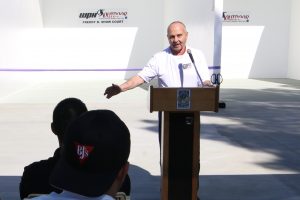 “If you would have told me this was going to happen two years ago or even six months ago, I would have told you that you were crazy,” chuckled WPH Randolph Park mega donor Doug Clark. “This is truly incredible what’s happened here.”

Doug Clark quickly introduced the mayor of Tucson, Johnathan Rothchild, who thanked the City of Tucson, Parks and Rec, Randolph rec center; it’s directors and staff for their overwhelming and continued efforts to push the construction and accessibility of the park forward. 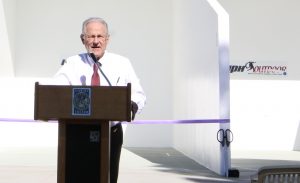 “The World Players of Handball did this the right way and set an example for others to follow,” stated Mayor Rothschild.

“In my 38 years in handball, today’s ribbon cutting is unquestionably the best day I’ve ever experienced in the sport,” stated Fink. “There is an indescribable energy and vibe you feel in this park that has to be experienced to understand. I could not be more proud to be part of this amazing team that worked tirelessly to make this spectacular park come to life.” 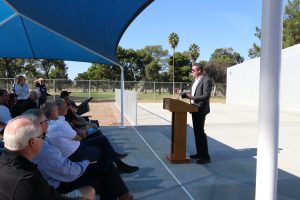 “There are so many people to thank,” stated WPH Executive Director and project quarterback Dave Vincent. “This is truly a community project. We received invoices from our contractors that were slashed in half because they believed so much in this effort.  Not just one, but all of them! I came in one Sunday morning to take pictures and Tom Kittle, the owner of Kittle Construction and lead project manager of this court remodel, was digging a trench with an old shovel, getting dirty on his own time.  This ‘type’ of leadership is sewn all through this outdoor complex.  From Benny Young and Jeff Healam’s daily efforts, to 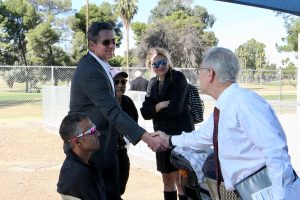 Mayor Rothchild, Doug Clark, Fred Banfield, the local and national donors, plus legacy lifetime members and volunteers like Pete Jorgensen, Chuy Manuel, Alex Trujillo, Ivan Lugo, Joy Healam and coach Abe Montijo’s Junior group from the Fred Lewis Foundation.   We have raised nearly all of the money needed to play on the courts, but we still have some loose ends to complete it and we need your help.”  The WPH is a 501C3 Non Profit Tax Exempt Foundation at 3561 E Sunrise Drive, Tucson, AZ, 85718.  info@wphlive.tv. 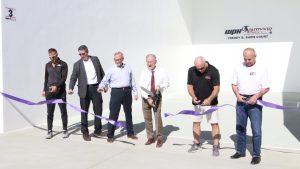 You can still get your name or message on the Legacy Wall with your $500 or more donation to the project.  WPH anticipates reaching final financial park numbers by 2020. 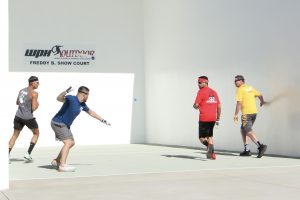 The WPH will host a blind draw donation doubles on Saturday, November 16 at 9 am, with all players and fans welcome to enjoy a great day of handball, BBQ, and camaraderie at the best 3-Wall park in the world. Register on site and enjoy the courts!