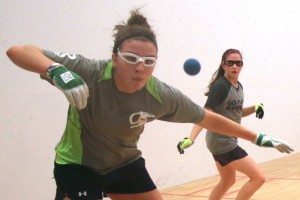 Alvarado started the one game final to 25 in elite form, serving aces and finding the bottom board with both hands en route to a 14-10 lead. Alvarado dove and just missed a rekill attempt that would have given him a 15-10 halftime-lead, opening the door for a shocking momentum shift. Chavez completely dominated from that point forward, taking the halftime lead at 15-14 and outscoring Alvarado 10-2 in the second half with incredible serves, finesse kills, and theatrical gamesmanship. The intensity between the two competitors created an electric atmosphere, as Chavez’s 20-years of frustration in losing to Alvarado was set free on the Senior Race 4 Eight’s greatest stage.

Reilly attacked Casey in game one of the final, handing Casey just her second lost game in her WR48 career, 15-2. Casey changed her tactics in game two, building an 8-1 lead by keeping Reilly in the backcourt and keeping the ball off the back wall, preventing Reilly from executing her patented back wall kills. Despite Casey’s quick start in game two, Reilly nearly caught Casey, executing her offense from virtually everywhere on the court late in the second game, but ultimately falling, 15-12. Casey built an early lead in game three by making incredible retrieves and precise pass shots, and the match reamined in doubt until the very end. Casey would clinch her seventh WR48 title in seven starts and her second consecutive WR48 Player’s Championship in front of the largest gallery in WR48 history, 2-15, 15-12, 15-9. “I had to really play my best against Aisling,” revealed Casey. “The tour is so exciting with so many great players participating in the events. I am really looking forward to next season.”

WR48 Player of the Year: Catriona Casey
Catriona Casey entered the WR48 II season as the only undefeated player in the history of the Race 4 Eight, winning the first three WR48 events in the inaugural 2013-2014 WR48 season. Casey continued her unprecedented dominance in the WR48 II season, winning all four events en route to becoming the emphatic WR48 II Player of the Year. Casey outscored her opponents 440-116 (3.8:1) in 12 WR48 II matches over the four 2014-2015 WR48 II events, winning 24 of 26 combined games played in Southern California, San Francisco, New York and Salt Lake City