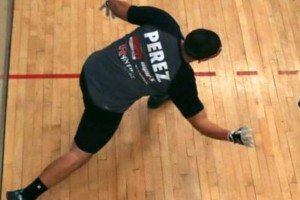 R48 Playoff Match of the Year: L. Cordova vs. Perez 2015 R48 9th Place Final San Francisco + D. Cordova vs. Cooney
Luis Cordova and Vic Perez are two of the Race 4 Eight’s most promising mid-twenties talents, possessing the skills and drive that will likely make both top five players in the next few seasons. Cordova and Perez staged one of the most physical battles in R48 history in San Francisco, with both pros blasting the ball on virtually every shot and diving with complete disregard for their bodies throughout the one-game thriller. After 60 minutes of extraordinary effort and excitement, Perez led Cordova 24-22. Perez would serve twice to win the match but Cordova stayed alive with incredible clutch shooting to force overtime. In overtime, Cordova scored two quick points to claim the match, while announcing one of the most exciting rivalries on the R48 tour.

Daniel Cordova and Stephen Cooney entered their 9th place final at the R48 IV NYAC tied for the eight spot in the R48 IV Points Standings, meaning the winner of the match would earn the eighth invite and the incentive money to the WPH Aces Player’s Championship in Salt Lake City. With thousands of dollars and a potential season-ending Elite 8 ranking at stake, Cordova summoned his best handball, building a 15-5 halftime lead with two-way hop serves and incredible two-handed power. Despite trailing throughout, Cooney continued to battle and apply pressure, seemingly grabbing the momentum with his fourth consecutive point to serve at 14-23. Cordova earned a crucial side out, and scored his 24th point with arguably the best shot of the season, an off-balance, shoulder-height, 33-foot left-handed flat kill. Cordova would score the 25th point to end the match in the next rally. “I just told myself to go for it,” revealed Cordova referencing his left-handed kill to score his 24th point. “I was really nervous throughout the entire match and I was finally able to relax after that shot. It definitely made scoring the 25th point a lot easier.”

Cordova would defeat Cooney for the second consecutive match in the round of 16 in Salt Lake City, locking up the R48 IV season-ending #7 ranking and the WPH R48 IV Rookie of the Year.

R48 Rookie of the Year: Daniel Cordova
Starting the Race 4 Eight Season unranked, Daniel Cordova joined the tour in Tucson in November of 2014, qualifying for the first time with an impressive win over Shorty Ruiz. In January’s 2015 R48 Houston, Cordova qualified and advanced to the round of eight for the first time, claiming fifth place by defeating Abe Montijo and Marcos Chavez. Cordova continued his white hot rookie season the next month in San Francisco, defeating Jon Iglesias en route to a 7th place finish. Needing to finish 9th in March’s NYAC stop to secure an Elite 8 invite to Salt Lake City’s WPH Aces Player’s Championship, Cordova defeated WPH #2 Luis Moreno and WPH #9 Stephen Cooney to clinch his first R48 invite in Salt Lake City. Cordova advanced to his first semifinal in Race history in Salt Lake City, defeating Stephen Cooney and Mike Schneider to finish the R48 IV season as the #7 pro minutes. Playing his sixth match of the weekend, Sheridan pushed SR48 #1 Marcos Chavez in the final, trailing just 13-15 at halftime before succumbing, 25-15. Sheridan finished the season as the #6 SR48 pro.

SR48 Rookie of the Year: Tom Sheridan
47-year old Irish legend made his first SR48 start at the WPH Aces Player’s Championship in Salt Lake City, advancing to the finals with outstanding victories over top five SR48 stars Chris Watkins and Andy Schad. Trailing Watkins 18-21 in their one game quarterfinal clash, Sheridan relied on his experience and dynamite left hand to overcome the “Waddy Dog.” Sheridan then battled SR48 #2 Andy Schad to a 21-21 tie in the semifinals, ultimately advancing 25-21 after one hour and 40

WR48 Rookie of the Year: Martina McMahon
20-year old Irish sensation Martina McMahon was bounced in the round of 16 in her first WR48 start at the 2014 Simple Green U.S. Open, but returned to the WR48 tour a different player five months later, demonstrating more focus and determination in her next two starts. The silky smooth lefty defeated Shirley Chen, Danielle Daskalakis and Aoife McCarthy en route to a third place finish in New York, and validated that top three result in New York with another third place finish four weeks later at the WPH Aces Player’s Championship in Salt Lake City, defeating Jessica Gawley and Danielle Daskalakis. McMahon nearly advanced to her first WR48 final in Salt Lake City, pushing world champion Aisling Reilly to the limit in a three-game semifinal thriller. McMahon finished the season as the #5 WR48 pro