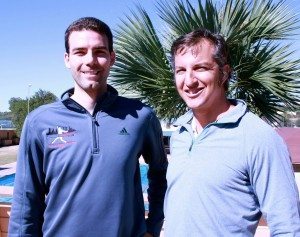 The battle for the eighth and final spot in the 2015 R48 Houston became the R48 Qualifier match of the year, as former Houston resident and top 20 WPH pro Adam Bernhard challenged former USHA qualifier Dave Munson on his former home court at the Tellepsen YMCA in downtown Houston. The contrast in styles between the two competitors created a riveting and compelling showdown, as the offensive-minded Munson looked to shoot for the bottom board from everywhere on the court, while the tactical Texan looked to use the ceiling and the angles and waited for the perfect opportunity to end the rally.

Munson electrified the partisan Bernhard gallery throughout the one-game qualifier final, hitting deep-court rollouts with both hands to lead throughout the one game match. Bernhard stayed within striking distance by slowing down Munson’s offense with perfectly placed ceiling shots and lobs, but Munson maintained the lead throughout, arriving at 24-20 and standing just one point from joining the R48 pros. Bernhard earned a side out and scored four consecutive points to force overtime, scoring the tying point on a daring back wall kill from 37-feet. Munson and Bernhard traded points to 26, setting a new overtime record for points scored in a qualifier match. Bernhard completed his improbable comeback on a deep court Munson error, taking the match 28-26.