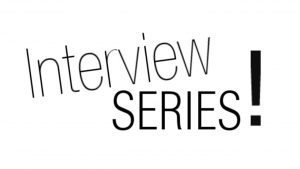 WPH Senior Reporter David Fink had a chance to sit down with fan-favorite and R48 superstar Naty Alvarado, Jr. in advance of the 2016 WPH Player’s Championship. The living legend and 5-time R48 finalist candidly discusses his goals, his most important win, his training, heading back to the qualifier, the importance of handball to his family, junior handball development and much more.

DF: The last time we saw you in the SR48 final at the 2015 Simple Green U.S. Open, you suffered an incredibly painful and debilitating leg injury. Have you fully recovered?

Naty: Yes I am good now, that injury was all on me. A poorly prepared athlete usually gets hurt when he exceeds his bodies limits.

DF: You advanced to the R48 final in five of the first 16 R48 events from 2011-2013 and were a perennial top four pro throughout much of the first three R48 seasons. You will enter the R48 qualifier for the first time in Portland? Did you ever see yourself entering a qualifier after more than 20 years in the top eight in the sport? 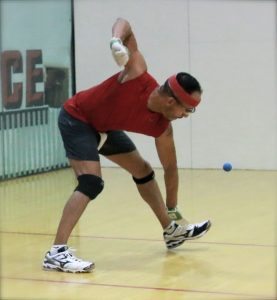 Naty: I am all about paying my dues if I slip into a dormant state. It’s just another opportunity to challenge myself provided by the WPH and the players of handball. The WPH allows any player of any skill set to keep compete with the current great players we have playing, it’s very difficult to sit and watch these opportunities slip by me.

DF: You’ve stated in the past that the most important match is the next match, but at 42 years old, can you look back on your illustrious career and identify a few of the defining moments and matches that have been the most special to you in your 20 years on the pro tour?

Naty: Here’s one that comes to mind: Des Moines, Iowa, May of 1992, I qualified for the first time to play in my first pro event by beating David Salome. For me, that was the springboard to a long career and competing at the highest level of Handball.

DF: You’ve taken several hiatuses from the R48 tour during the past two years, sometime due to injuries and others to “recharge.” How much has watching the live handball on ESPN from your living room inspired you to start training and preparing to return?

Naty: I can tell you that Handball today is better because of the WPH Live Broadcast. Players from yesterday, players playing today, and some of those trying to separate themselves from this level of the game keep getting re-directed to this great sport. You used the word “recharged,” you’re dead on it. Just watching a one-minute clip or a picture of a court that I can almost smell gives me a sense of belonging. I can tell you my best piece of advice for any handball player… log on to the wphlive.tv, you can only get better at handball from watching the best play at their best.

DF: You’ve seemingly retired 10 times in the past 13 years, but fortunately for the fans, you always find your way back to the tour. What motivates you to continue to push yourself to play against the best players in the world?

Naty: There is nothing like pro-level handball. When I am preparing or playing at these events I feel challenged to state of constant awareness. 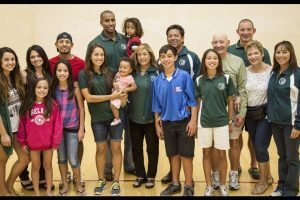 DF: The Alvarado/Bike family is extremely close, with the majority of the family living within three miles of one another in Spring Valley Lake, CA, and spending time together at least once a week. With weekly Big Ball doubles games on Naty Sr’s backyard court to numerous birthday, holiday and weekend celebrations, how special is it for you to be so close to your entire extended family?

Naty: It’s the most important part of my life and I thank God that we all live so close to one another. We gather for any birthday and every other weekend gathering feels like it’s someone’s birthday. My dad building that court adds this handball dimension that was slipping away. We use Big Ball as a way of trash talking to one another and laughing at those errant shots that get launched out of bounds.

DF: We’ve seen your dad offer advice during matches that led to you making key adjustments. How much time do you spend talking handball strategy with your dad, Naty Alvarado, Sr. and your brother-in-law John Bike, Jr.?

Naty: We rarely discuss handball outside of a handball event. Like everyone else, there is so much going in our lives and in our children’s lives that handball seems to take quite spot in the background leaving room for the next generation’s of Alvarado’s, Bike’s, and Morton’s to shine in their endeavors.

DF: You have cultivated a well-deserved reputation as a fan-favorite because of your sensational skills, sportsmanship, and willingness to connect to the fans. What does it mean to you to be recognized as a fan-favorite in every city in which you compete? 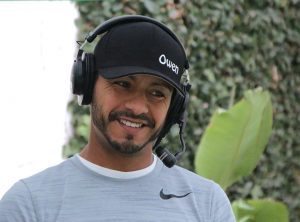 Naty: We play a sport that is unlike any other. Our fellow players are genuine, interesting, and fun to be around. My parents always displayed open arms to anyone, but roll the red carpet out for fellow handballers. It’s just so happens Portland is my home away from home. We used to travel to Portland as a family in the early 80’s for an event held at Bill Flowers Court Club. Bill had a big two-story home across the street from the club.  We crossed paths with long time family friends Dave Steinberg and Chatten Hayes. Then fast forward your watch to 1994, I started competing in a summer pro-am, called the Hood River Open, which played host to the who’s who of pro-ballers in that decade. I became close to friends to a Portland Handball character named Lew Merz. My karaoke and golf buddies, Steve Grow and Troy Peterson have always treated me like true lifelong friends. The Portland list of handball ambassadors is long and appreciated for all that they have done for Handball and my family. Jeff and Jean Kastner, Walt and Laura Kastner, Ed Grossenbacher, Steve Lippman, Craig “Mr. Music” Trull, Chuck and Debbie Kathrens, Carl Mattson, Mike Hollander, Mike Blair, Dale Hinman, Jennifer Hinman, C.J. Conrad, Curt Heiting, Wally Palmberg, Dave and Sue Delaney, Pat Hartford, the Steele Family, The Beall Family, Cody Tonwsend, and the late Rocky Benevento.

DF: The American junior players, and to some extent, the American pros are being surpassed by their Irish counterparts. What do the Americans need to do to reestablish the upper hand in the rivalry?

Naty: We need a program that mirrors the GAA handball programs or a start a new way of training handball. A handball training facility in the United States needs to be blueprinted.  Until then, we may be seeing these Irish winning streaks for many years to come. Their discipline is unmatched. Their drive is noted with consistent results.

DF: You have an exciting adult handball clinic planned for Thursday night, May 5th at 7 pm at the Multnomah Athletic Club. What can attendees expect to learn during this once in a lifetime opportunity to share the court with you? 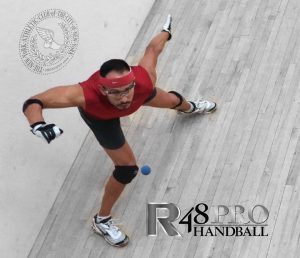 Naty: There will definitely be a blend of my experiences within the game and outside the game. I love passing out simple handball knowledge to an anxious handball enthusiast. I typically touch on offense and defense points of view. Believe it or not, my favorite part is the preventive injury portion. It’s my opinion that handball players run themselves into the salvage yard way too quickly. Simple exercises can extend and in most cases improve your level of play.

DF: What advice would you have for a talented junior handball player aspiring to become a R48 pro?

Naty: Take your time with your skills, enjoy each day on the court, and remember the referee is human.

DF: How will you prepare differently for your first event in eight months and just your fourth event 19 months in Portland?

Naty: Once I step on the court and I lose the coin toss, it will just feel like another Pro Match is about to begin. I will acclimate very quickly.