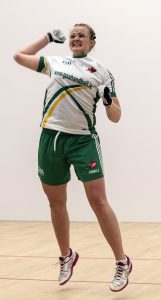 Reaching the apex performance of a pro athlete requires dedication, talent, endless practice, passion, and all of the intangibles which includes:  inspiration.  Every handball pro was inspired as a young player, either by watching a top player, meeting a top player, taking a lesson with a pro, or even just having the opportunity to have a conversation with a pro. Junior handball players are fortunate to have the opportunities to share the court with today’s pro players at virtually every major handball tournament, providing today’s juniors with the spark and inspiration to become the next generation of stars. Many of today’s younger pros were inspired by today’s veteran pros, meaning they are often playing their heroes!

We reached out to a number of today’s top handball stars, and they quickly fired back responses remembering the moment that a handball pro gave them inspiration. 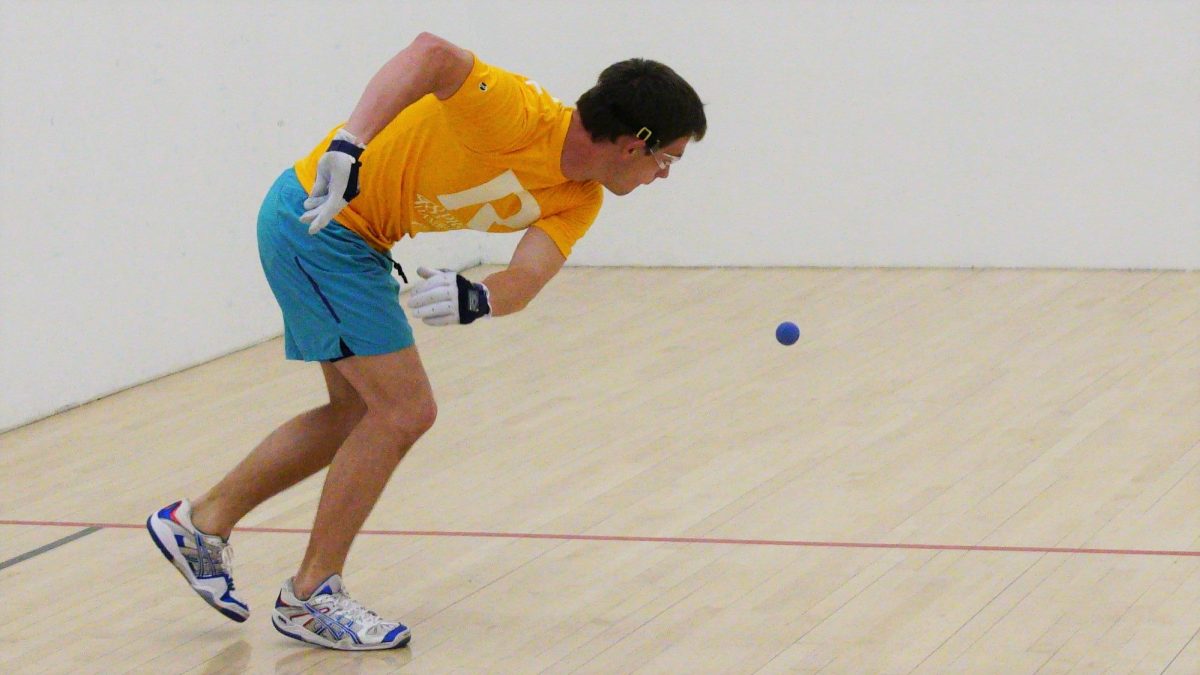 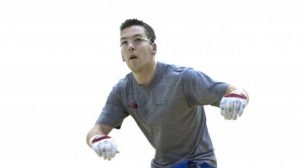 “It was when Tony Healy conceded his three timeouts in the 2003 World Championships in Dublin, because Paul Brady was cramping badly in the final.  The ref would not give Paul the injury timeout, so Tony gave all the time outs he had left. Tony eventually lost in the tiebreaker.   Plus, Tony’s methodical game was mesmerizing to watch.

Eamonn Murphy my junior coach, and while he wasn’t the best at teaching skill, he always made sure you gave it your best and gave it gusto. He would usually say. 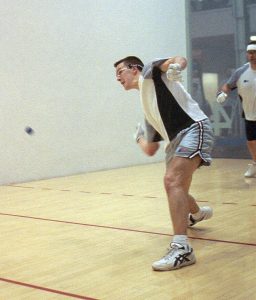 “Make sure of it!” “Hit the ball at the bottom of the wall!” And “keep the ball on the wall” But the most incredible thing was my old coach would spend time with anyone and drive them anywhere for a game, no matter what their ability was, as long as they showed interest. To me it was the most inspiring attribute and my first coach, Billy O’Connell had this as well, as did my father Don.

People in my later years still inspire me to this day and I don’t think I could ever live up to the legacy they will leave in the sport.  People that come to mind are Don Quinlan, Mike Dau and Fred Lewis just to name a few. These few people I think are the true champions of the sport.” 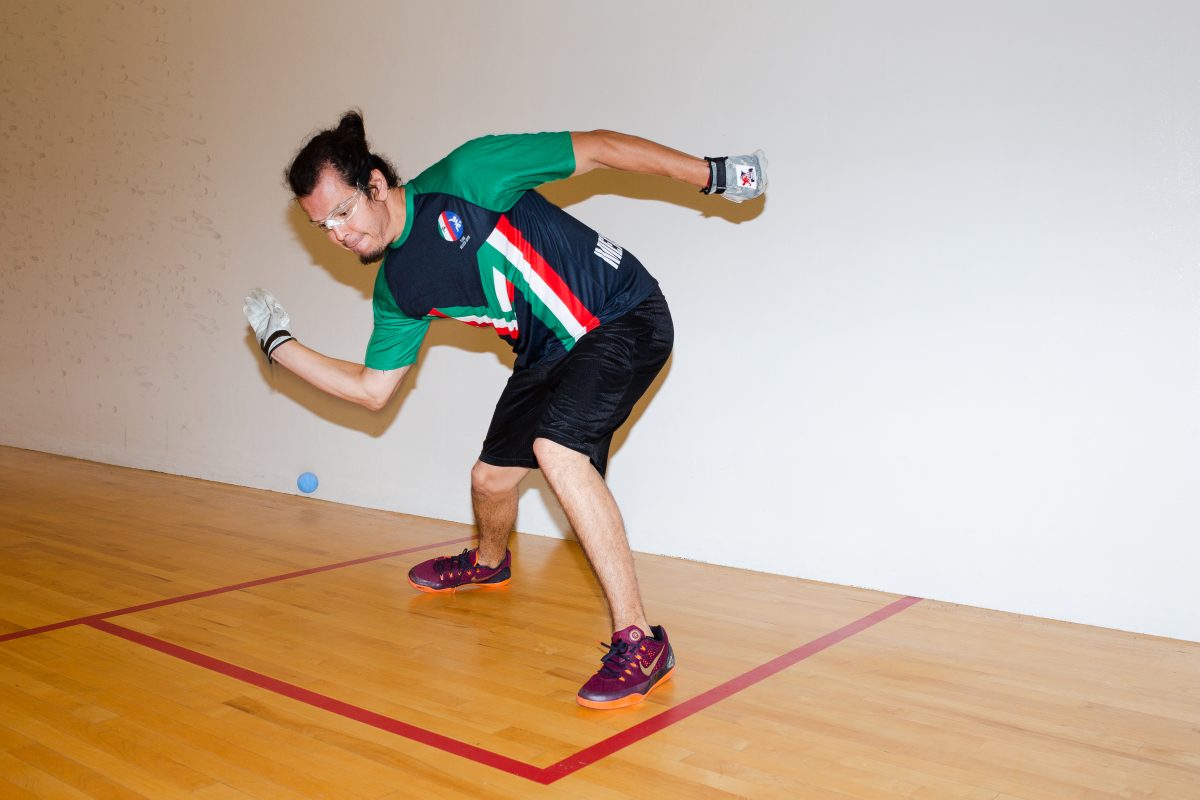 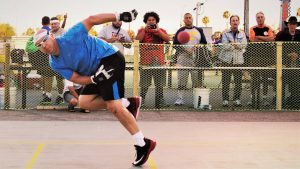 My favorite junior handball experience was attending the Dave Chapman Vegas Camp. Dave actually donated a few slots to juniors, and I was lucky enough to be one of them.  To this day, the camp is one of the best times I’ve ever had and was instrumental in my handball development. 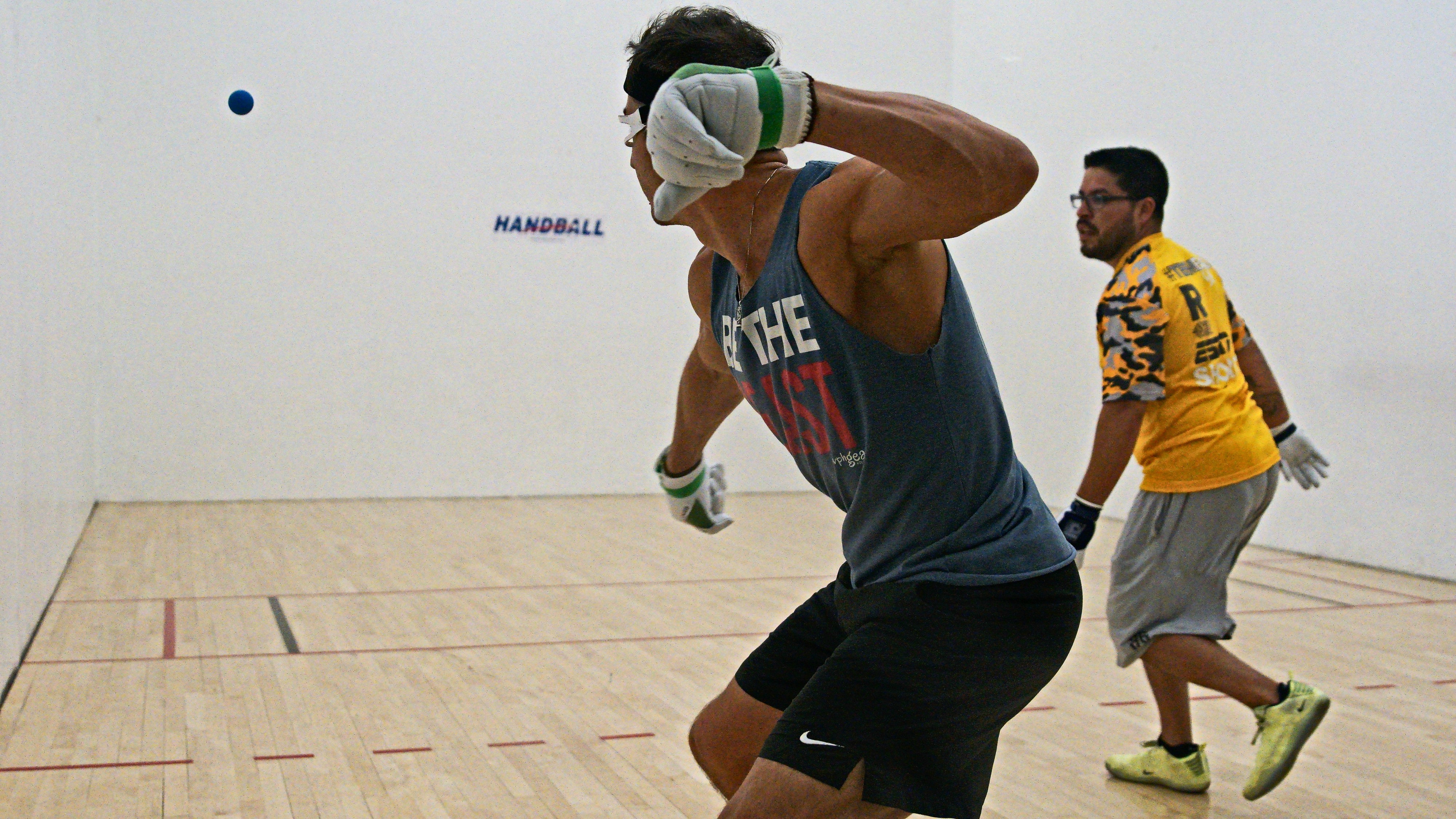 I was very fortunate to attend the Steamboat Springs handball camp when I was 12.  John Bike was one of the instructors – I was just in awe of him. 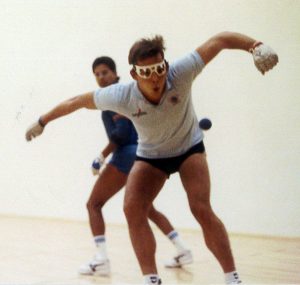 I had a chance to play a game against him after taking lessons for the weekend and it was a huge thrill. Of course, I thought I should win, but I could not even score a point, despite the fact that he was barely trying. At the end of the camp, John and Rick Hatcher played an exhibition match and I was awestruck by the level of play. To get to hang out with those guys, who I can now call my good friends 30 years later, was such a huge thrill for me. I was so inspired to improve after that experience. I’m so grateful for John and Rick’s kindness and willingness to teach me handball skills that I still apply to my game today. I had a chance to play doubles with John yesterday and I’m still learning from him and I’m still so inspired having a chance to share the court with the legend. 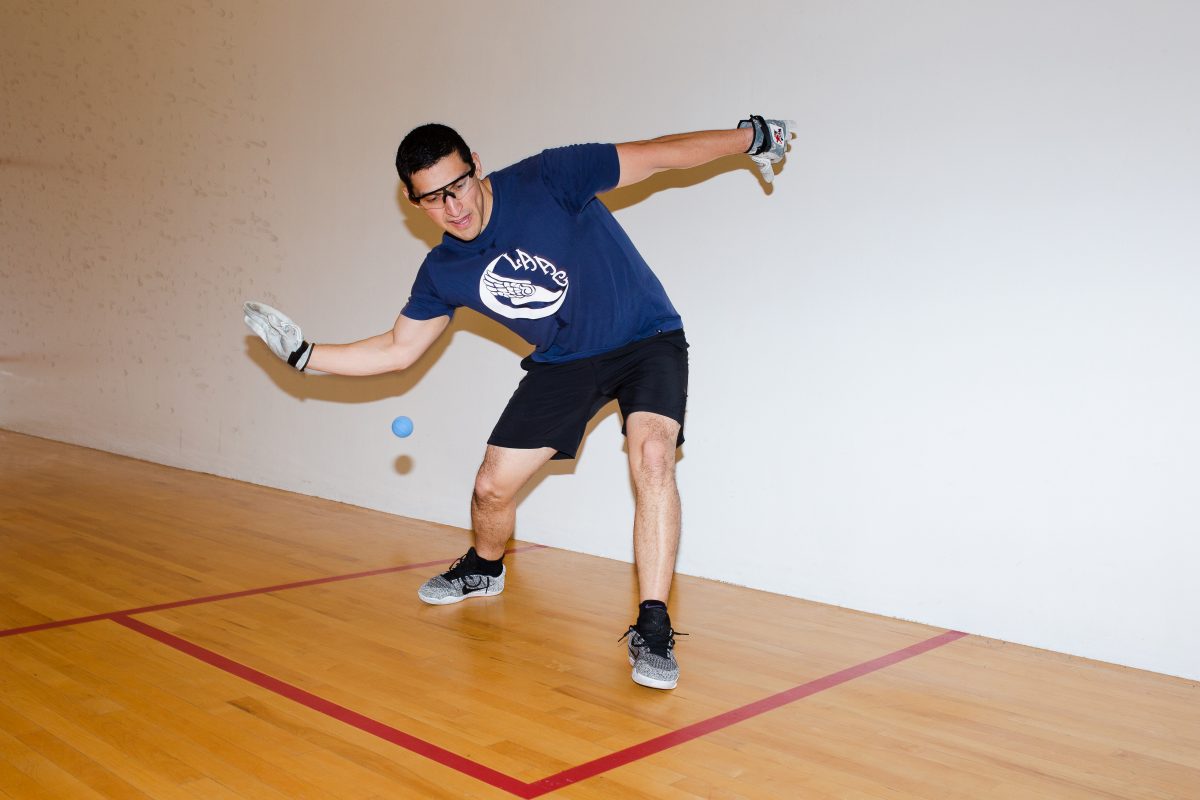 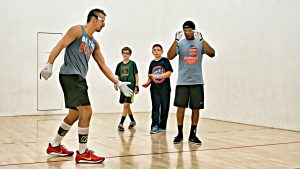 I remember one time at the Bowling Green tournament in 2009, I was talking to Dave Fink.  He gave me tips on how to improve my back wall.  He said I was swinging too far back and he recommended that I should let the ball go out front of me.  I was excited to practice the following week and I found the tip useful as my back wall kill percentage increased.  I used that simple tip throughout my collegiate handball career and eventually developed into a pro player. 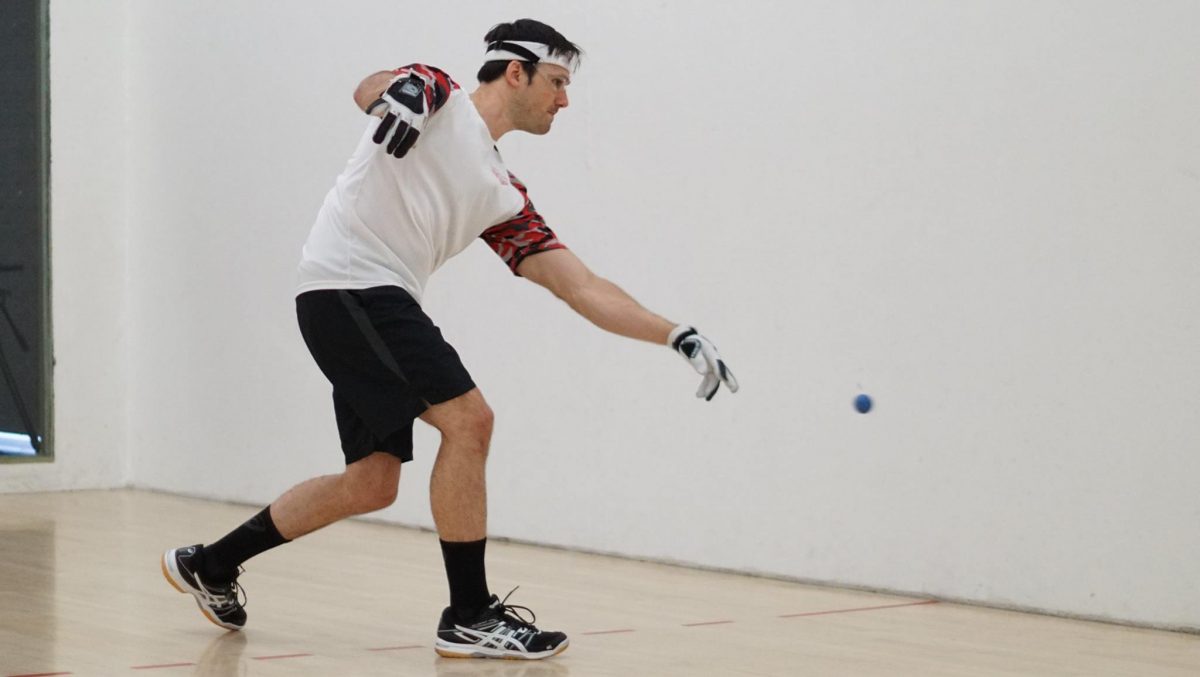 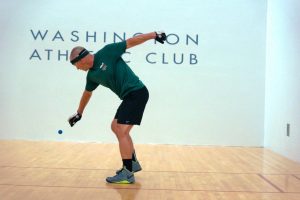 For me it was the little things pros did. I was once doing drills in a court in Colorado when I was 12.  John Bike walked by the court at the moment I hit one of my best (and only) kill shots.  He yelled “woooohooo” and I was so proud.  That kept me in the court for another 30 minutes just trying to replicate that kill shot.  Another time I heard that Tati Silveyra was getting ready to play on a court when I was at the California State Championships in Fresno when I was 13.  I peeked over the court and saw him warming up.  He saw me and winked at me.  It was extremely memorable. 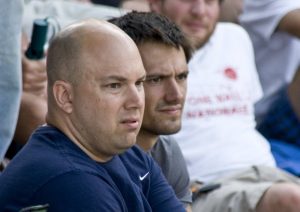 Some of my favorite handball memories are attending pro handball camps with my father when I was an early teenager.  I received tips from Vern Roberts, John Bike, Tati Silveyra, Naty Sr., Naty Junior, Fred Lewis, and David Chapman.  When I joined the pro tour Dave Chapman was the first to ask me to dinner.  He was my handball idol and I am sure he felt that.  I still remember what he ordered from Olive Garden, the Tour of Italy (he ate the entire thing).  DC went out of his way to make me feel welcome on the tour and we became very close friends.  I always looked up to the pros and still do. Any time they acknowledged my existence was meaningful.  If they went out of their way to offer a tip or two I was mesmerized.  Additionally, the experiences I had getting to play some Northern California pros such as Chris Tico, Anton Wilson, James Komsthoeft, Dean Crispen, Ali Abdullah, and Norm Dunne were extremely memorable and helped me develop as a player. 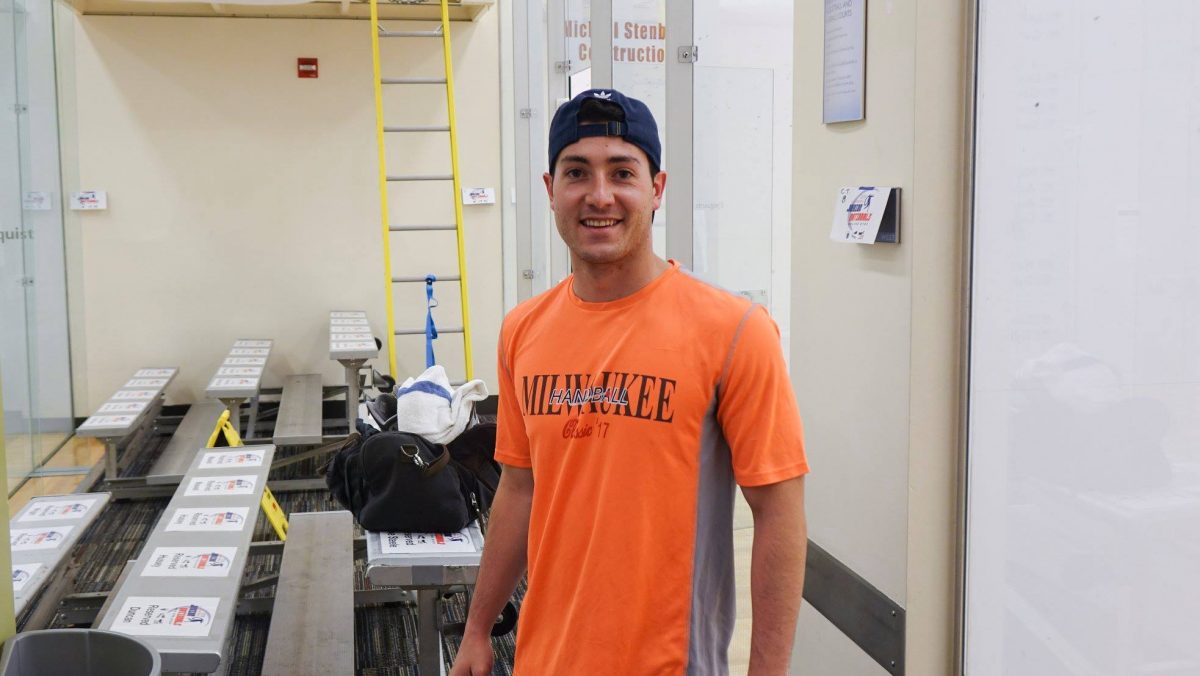 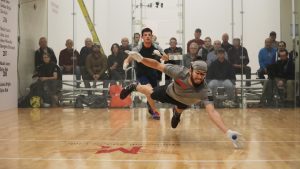 The pro player that donated his time the most to inspire me was Daniel Cordova.  As a junior when I began playing handball, the Cordovas were on the rise and everyone back home was motivated by their level of play.  I remember Dan coming back from Lake Forest College and inviting me to play with him.  After our practice matches he would take another couple of minutes to give me pointers and to talk strategy.  His willingness to help me and multiple others inspired me to become a better player. Daniel’s guidance was ultimately what made me decide to attend Lake Forest College as well. 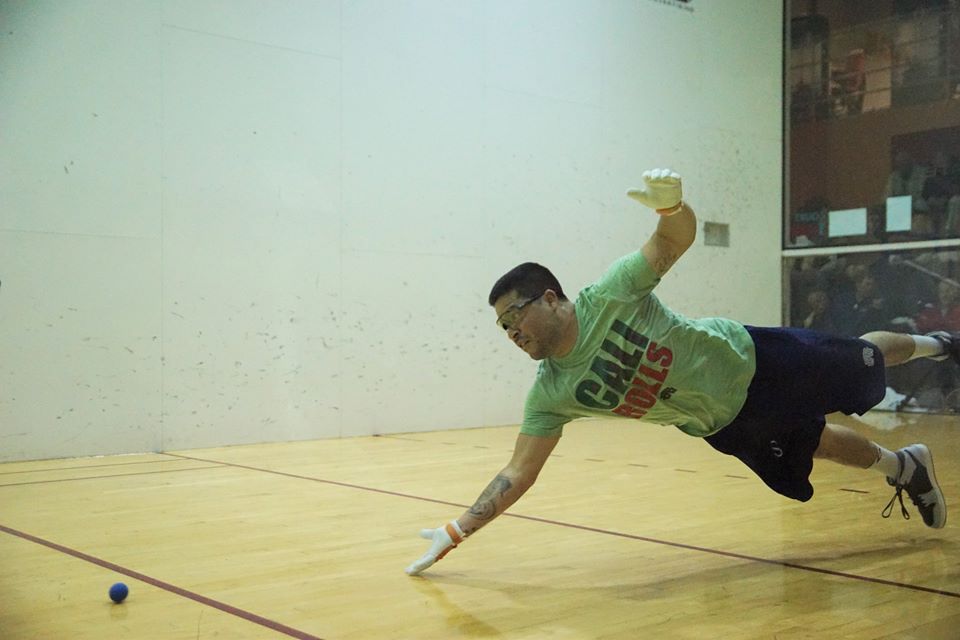 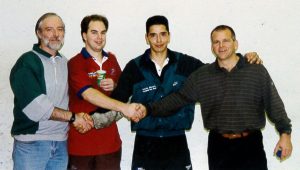 For me it was Tati Silverya.  I was 11 and playing big ball on some 3-Wall courts in Commerce (CA), and Tati came up to the courts with a small ball and said, “If you want to get good, hit this ball 100 times a day with each hand.”

He then dropped the ball and “Pow, pow, pow!” – he just smashed it, low and hard with both hands.  I hit the small ball, and I was instantly hooked and never stopped playing.  Tati would swing by from time to time to play with us, and I got to see him play in some tournaments.  He was just amazing. 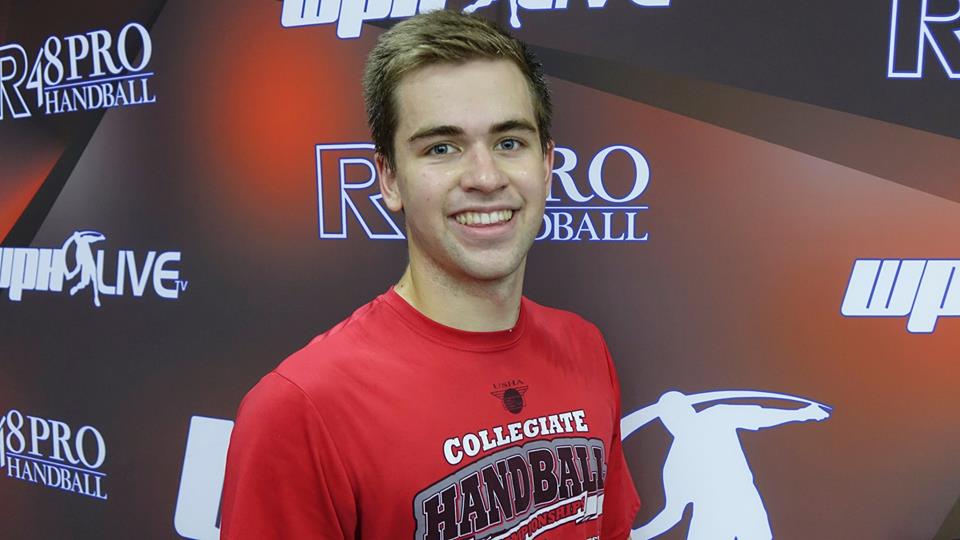 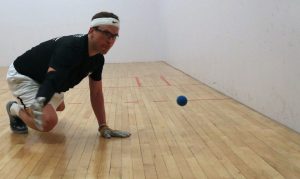 I remember going to the Mankato handball camp when I was still in high school. Emmett Peixoto and Andy Nett were both there as a part of it.  Each spent one-on-one time with each camper there.  Getting that coaching from each of them was instrumental in me improving my game and gave me tips that have help make me the player I am today. 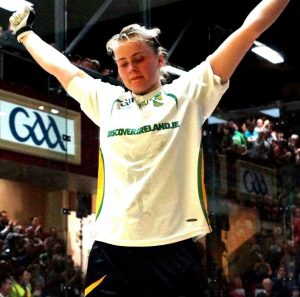 My most memorable moment from a top player was the time I asked Aisling Reilly how she made the gaps (junior to top player) so young, which I aspire to do myself.  What she told me was pretty basic.  She knew she had areas to develop, and she has done exactly that.  Instead of being just average, she took her weaknesses and worked as hard as she could.  She enjoyed the journey of becoming a 2x world champion…even though this is so simple and probably insignificant to other players.  It enjoyed the conversation with her, as it was done in a very relaxed manner and made me realize that “yes, I want to be a top pro within my sport, but if I don’t address my weaknesses first (which we all know there is plenty—lol) and fix them, and also enjoy my progression by taking in each experience I come across, there’s really not much point doing it.  Something so simple, but shows you just don’t walk in to be the best, you need to work to succeed. 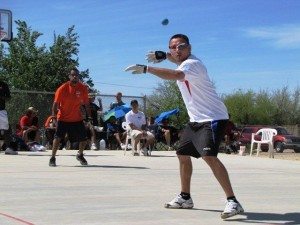 Pee Wee Castro inspired me when I was a junior – he had the heart of a lion he was never scared of any game.  He took on all challenges.

Pee Wee never played with a strong player; he would just pick a teammate that would have the same drive and heart to win a game like he did. 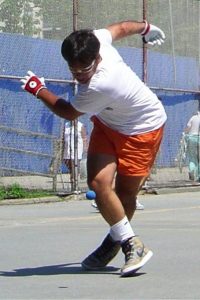 I’ve been lucky enough to have a bunch of experiences with 1-Wall pro players as a junior. I’d have to mention Albert Apuzzi & Dori Ten as two players who gave me a lot as a junior.

Albert would tell me about pro players from different versions of the game such as Chapman, Bike & Tati, and he’d break down their different styles of play. He told me a few things that helped me prepare for playing Vince Munoz when he came down to the 1-Wall Nationals…and it helped.  Dori wouldn’t always agree with everything he’d say and she’d give good arguments, as to why and by the end of the conversation, I’d have a well-rounded understanding of whatever game or player we were talking about. They definitely showed me how you can disagree, argue your point and reach a place of understanding without compromising your stance or belief. I’ve learned a lot of things from being around them both on and off the court and I’m truly grateful for that. Next time you see a young player in the court or at a tournament, give the youngster a tip, play a few points with the youngster, teach the aspiring player some strategy…you never know, that young player could become the next Emmett Peixoto, Luis Cordova, or Megan McCann!