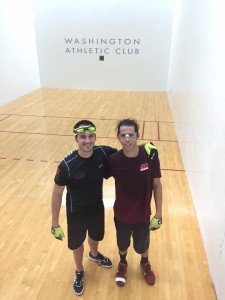 The Olympic Club’s Handball Pro Emeritus and Race 4 Eight co-#3 Emmett Peixoto faced current collegiate national champion and 2015 WPH Rookie of the Year Daniel Cordova in the first match of the afternoon. Peixoto had twice defeated Cordova in two games during the 2014-2015 Race 4 Eight IV season, but the clash at the WAC would be far more dramatic. Peixoto controlled the action in game one, needing just 29 minutes to take a one-game lead, 21-7. Cordova battled back in game two, building a 19-14 lead and holding off a late Peixoto rally that saw “The Rock” tie the score at 19. Approaching the two-hour mark after the second game, including nearly 90 minutes for the second game alone, Peixoto relied on his fitness in the tiebreaker. Peixoto raced to an 8-0 lead in the decider and maintained his eight-point advantage to the finish line, winning 21-7, 19-21, 11-3. “I have been feeling good with my game,” stated Cordova after his best showing against the R48 #3. “Emmett started really calm in the tiebreaker and hit good serves and good pass shots. My serve started to slow down a little bit and I wasn’t getting any setups off of it.” 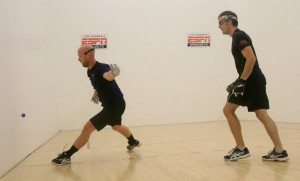 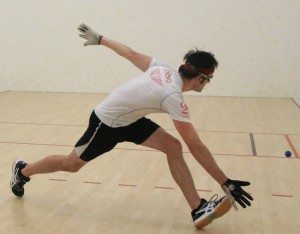 Lenning, Peixoto, Cordova and Torres coached instructional clinics between the semifinals and finals, as the world-class players shared their secrets to success with local players, junior players, and Washington Athletic Club members. “We always make it a point to host clinics at all of our events,” revealed WPH Youth Donor and Development Director David Fink. “The mission of the World Players of Handball is to inspire the next generation of players by showcasing the best players in the world, while hosting clinics, tournaments and “Fun Days” around the country to promote participation in the great game of handball.”

Erik Torres and Daniel Cordova met for third place in the WAC’s Pre-Race Kickoff, with the early 20’s stars dazzling the appreciative Washington Athletic Club galleries with stellar play and shot making. Torres dominated game one, winning 15-6. Torres remained in control in game two, building a substantial lead and reaching match point at 14-9. The match appeared to be just a formality, but Cordova found his groove just before the clock struck midnight. Fending off three match points, Cordova forced overtime and ultimately a tiebreaker, 17-15. Cordova carried his momentum into the decider, quickly routing and rattle Torres, 11-1. “I barely survived,” stated Cordova. “I started to apply more pressure and I think that made the difference.” 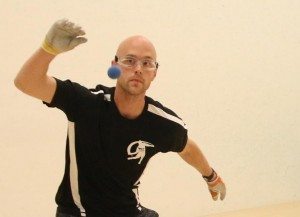 Sean Lenning and Emmett Peixoto continued their rivalry that started as teenagers 15 years ago in the WAC’s Pre-Race Kickoff final, with the pair nearly even in wins and losses in more than 60 career matches. Peixoto defeated Lenning in their last Race 4 Eight encounter in the quarterfinals of the 2014 Tucson Memorial R48 IV Stop #2, as well as handing Lenning a two-game defeat in the semifinals of the 2015 USHA Four Wall Nationals. Lenning entered the WAC Pre-Race Kickoff final in the midst of one of the best all-around seasons in handball history, having captured the 2015 WPH Race 4 Eight Player’s Championship, the 2015 WPH Outdoor Xrossover Championship, the 2015 1-Wall Small Ball World Singles Championship and his 7th USHA Three-Wall National Singles Championship. Peixoto had yet to seize a major trophy in 2015, but victories against Lenning, Moreno, Ortiz and Nash during the 2014-2015 season cemented his spot in the top three of the Race 4 Eight rankings and made “The Rock” one of the most consistent players in the game.

The action was fast-paced and captivating between the R48 rivals in the WAC’s Pre-Race Kickoff final, with both Lenning and Peixoto aiming to impose his unique style on the other. Peixoto started strong, building a 10-8 lead in game one, but much like the singles final at the Three Wall Nationals last weekend in Toledo, Lenning found another gear midway through game one to dominate the remainder of the match. Lenning scored 13 of the final 17 points of game one to seize the momentum and a one-game lead against “The Rock.”

“There were a lot of great rallies throughout game one, particularly in the second half of the game,” stated #teamR48 reporter Daniel Cordova. “In the second half of game one Emmett starting giving Sean a few setups and Sean started to hit his shots. Sean was able to win most of the long rallies and take control of the match.”

Lenning continued to dominate in game two, leading 12-1 in just nine minutes. “Sean was just doing his thing in game two,” reported Cordova. “Sean hit an off-the-bounce flat kill with his left to score his 12th point and there was just no stopping him. He was hitting good serves and off-the-bounce-killing and fly-killing Emmett’s returns.”