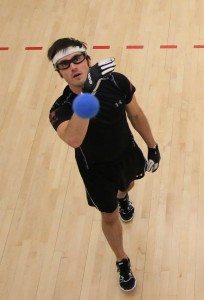 In a battle of junior teammates and Tucson residents, WPH #1 Luis Moreno faced WPH top 16 pro Abraham Montijo in their second quarterfinal clash in Race history. Moreno arrived to the facility just seconds before the start of the match and played sluggishly in game one, falling to a motivated Montijo, 15-7. Moreno spent the three-minute break between games warming up and blitzed “Honest Abe” in game two, 15-2. Moreno built a huge lead in the tiebreaker and held off a late Montijo rally to advance to the semifinals, 7-15, 15-2, 15-7.

Peixoto and Lenning have been battling one another for over 15 years, seemingly always going back and forth throughout their nearly two-decade rivalry. Peixoto played inspired and aggressive ball from the outset of the quarterfinal clash, dictating play and controlling the front court. Peixoto decimated Lenning in just 12 minutes in game one, winning 15-3. Lenning charged back in game two, imposing his will and intensity on his longtime rival. Tied at 10, Lenning appeared poised to force a tiebreaker but three unforced errors, including a costly error at 14-13, allowing Peixoto to advance with a 15-3, 15-13 win.

Perez was unquestionably the Cinderella Story of the event, entering as the #7 seed in the qualifier and fighting off match point in his round of 16 main draw match to defeat Mando Ortiz. Fink played his best ball in years, completely dominating all facets of the match en route to a shockingly easy 15-4, 15-1 victory.

Stephen Cooney advanced to his first Race quarterfinal with a comeback win over Anthony Selestow but faced the game’s most dominant player since the turn of the century. Brady had his sights set on not only the Tucson Race title, but the WPH R48 #1 ranking as well. Cooney was unable to mount a serious challenge to Brady, as “The Gunner” simply overwhelmed his countryman in Cooney’s first quarterfinal appearance.

Paul Brady and David Fink exchanged eight side outs early in game one with the score 1-1 before Brady was able to impose his serve and shoot game and build a 6-1 lead. Fink earned five consecutive points to cut Brady’s lead to 6-8, but a costly hand error ended Fink’s momentum. Brady scored seven of the next eight points to take game one, 15-7. Brady built a 5-1 lead in game two before Fink tied the score at five with two ace serves and two first strike kills. Brady regrouped and refined his return of serve to score nine of the next ten points to assume control of the clash, ultimately booking his spot in the final, 15-7, 15-6.

Luis Moreno squandered a 9-0 tiebreaker lead in his last match against Peixoto at the 2014 USHA 4-Wall Nationals and was looking for revenge in their first matchup since. Despite making 14 errors in game one, Moreno demonstrated flashes of brilliance and won game one, 15-6. Peixoto and Moreno battled in the front court throughout game two, often looking like mirrors of one another as both stars made incredible retrieves and flat kill shots. Moreno stretched the 8-8 tie to a 14-9 lead with devastatingly accurate deep court kills. Peixoto earned two side outs on Moreno errors but was unable to capitalize. Moreno advanced 15-6, 15-9 to setup a highly anticipated final with Paul Brady. 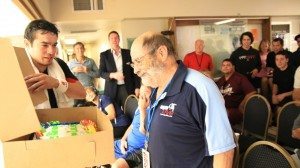 Please consider making a tax-deductible donation today and supporting the growth of the game. 100% of the donations received by the WPH go towards junior handball development. Donate on-line at www.thehandballstore.com, send your generous gifts through PayPal (extremehandball@cs.com) or by mailing checks to: WPH, 3561 E. Sunrise Dr. Suite 125, Tucson, AZ, 85718.